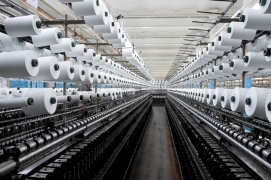 Commercial production has commenced in 26 of the 61 integrated textile parks sanctioned by the Indian Government under the Scheme for Integrated Textiles Park (SITP) in the country.
This information was given by Ms. Panabaaka Lakshmi, the Minister of State for Textiles in a written reply to the Rajya Sabha, the Upper House of the Indian Parliament.
“Since Scheme for Integrated Textiles Park (SITP) is a demand driven Scheme, Parks shall be sanctioned after receiving proper proposals including from the state of Maharashtra or in Solapur,” the Minister said.
The funds for setting up new textile parks are available under the SITP in 12th Five Year Plan, the Minister added.
Of the 26 SITPs where commercial production has commenced, seven parks are in Gujarat, six in Maharashtra, four in Tamil Nadu, three each in Andhra Pradesh and Rajasthan, two in Punjab, and one in Karnataka.
In November 2012, the Government of India sanctioned 21 new textile parks under SITP, taking the total number of sanctioned SITPs to 61.