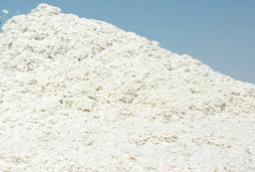 Raw cotton exports from Pakistan slumped 63.94 percent in quantity terms and 66.71 percent in value-terms during last fiscal, according to data from the Pakistan Bureau of Statistics.
During the fiscal year that ended on June 30, 2013, Pakistan’s raw cotton exports plummeted to 92,498 million tons from 256,541 million tons of raw cotton exports made in FY12.
Value-wise, raw cotton exports dropped by 66.71 percent from US$ 462.247 million in FY12 to US$ 153.872 million in 2012-13, the data shows.
However, industry analysts view this fall in raw cotton exports as a positivity, as Pakistani textile industry each year falls short of around three million bales of cotton against its total demand for around 15-16 million bales.
Last year, Pakistan produced 12.9 million bales of cotton, compared to the Government set target of 14 million bales.
According to experts, reduced exports would also help in stabilizing cotton prices at home which jumped to around Pk Rs. 7,200 per mound, almost 4-5 cents higher than international prices, a Business Recorder report says.
Reduced domestic cotton output, high prices at home front as compared to that in international market and contamination issues, kept raw cotton exports from Pakistan at a low during last fiscal, the report states.
Pakistan mainly ships its raw cotton to Bangladesh and Far Eastern countries, while a part of the same is also exported to India and China, but with growing cotton output, India is gradually establishing itself as a major cotton supplier catering to the global market, experts say.