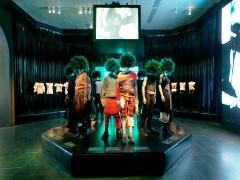 courtesy: The Metropolitan Museum of Art
An exhibition on Punk style clothing, recently held at The Metropolitan Museum of Art (Met) in New York proved to be a great success, with around 442,350 visitors walking down the museum to view the exhibition. This is the fifth highest number of visitors to have visited an exhibition at the museum over the past 25 years.
Titled “Punk: Chaos to Couture”, the exhibition was organized by the Costume Institute of the museum to show how Punk culture has influenced high fashion since inception of the Punk movement in the early 1970s till today.
Focusing on the relationship between the punk concept of ‘do-it-yourself’ and the couture concept of ‘made-to-measure’, the exhibition was organized around the materials, techniques, and embellishments associated with the anti-establishment style.
Themes included ‘New York and London’, narrating a story about origin of punk movement as a tale of two cities, followed by ‘Clothes for Heroes’ and four manifestations of the D.I.Y. aesthetic—Hardware, Bricolage, Graffiti and Agitprop and Destroy.
On show were some 100 pieces of men’s and women’s fashion, including original punk garments and pieces illustrating how haute couture and ready-to-wear apparel brands have borrowed punk’s visual symbols.
Vivienne Westwood, Marc Jacobs, Versace, Azzedine Alaïa, Dolce & Gabbana and Chanel were some of the designers who showcased their Punk movement inspired pieces during the exhibition.
Alongside original punk pieces, the exhibition also showcased recreated pieces influenced by dressing in punk music and videos such as ‘The Sex Pistols’ and ‘The Clash’ featuring punk heroes like Richard Hell and Patti Smith.
Punk originally refers to a rock music genre that developed between 1974 and 1976 in the United States, United Kingdom, and Australia. Punk bands were recognized by their fast, hard-edged music, typically with short songs, stripped-down instrumentation and above all their edgy and sexy dressing style.