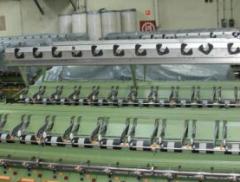 The All Pakistan Textile Mills Association (APTMA) has said that the abrupt rise in power tariffs, pursuant to the new energy policy, will hurt the country’s textile industry.
Under the new National Energy Policy 2013-18, the power tariff rates for textile industry have been hiked from Pk Rs. 9.18 per kilowatt hour (KWh) to Pk Rs. 14.82 per KWh since August 2013, which has badly affected the efficiency of the textile industry, particularly in Punjab, where around 70 percent of the textile units of the country are concentrated, APTMA Punjab spokesperson said.
The recent hike of around 61.32 percent has pushed up the electricity rates for Pakistani textile industry to nearly 14.4 cents, much above the average below 10 cents rate prevailing in the South Asian region.
Power tariffs in India, China, Bangladesh and Sri Lanka prevail at around 11.3 cents, 8.5 cents, 7.3 cents and 9.2 cents, respectively.
Also, the rate of interest that Pakistani textile entrepreneurs pay is high at 9 percent, as compared to 7.25 percent in India, 6 percent in China and 7.75 percent in Bangladesh.
According to the APTMA representative, hike in power tariffs would greatly hurt the textile industry in Punjab, which is already enduring high power tariff as compared to other provinces in the country.
The continuing power crisis, high power tariffs and interest rates, and spiralling labour costs would cause the textile industry to lose its potential of earning about US$ 13-14 billion per year in exports, directly impacting employability and economic growth, he said.
APTMA thus called on the Government to immediately review the situation and accordingly either rollback the tariff hike or let it continue after significantly reducing the interest rates so that the growth and labour productivity are not impacted.