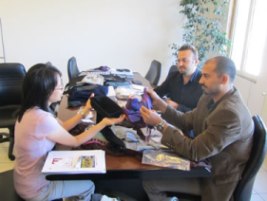 With Turkey’s growing domestic market becoming increasingly sophisticated and with the country boasting a strong local manufacturing industry, The Woolmark Company has been investing both time and resources in rebuilding the presence of Merino wool within Turkey.

Turkey already boasts a relatively strong manufacturing base – aided by its proximity to both the east and the west – and so The Woolmark has spent the past few years working closely with Turkish manufacturers. Added to this there is a growing importance for retail – with an increasing number of international brands exploring Turkey.

The past year in particular has seen the wool industry in the country enjoy a resurgence, with many European retail markets renewing their interest in sourcing products from a base closer to home than from further afield regions such as Asia. The added benefit of this is that both parties on the supply and demand chain are helping reduce their carbon footprint.

“Turkey already has an established manufacturing base, particularly in the circular knitting sector,” The Woolmark Company General Manager for Product Development and Commercialisation Jimmy Jackson said. “Yet their strength lay predominately with cotton and synthetic fibres.

“What this meant for us is that we did not need to teach them the basics, but rather how to apply their skills to Merino wool – with the crucial part being in the dyeing and finishing stage. We have about half a dozen jersey knitters who are strong in their field, and so The Woolmark Company Technical Manager (Dyeing and Finishing) Brenda Yang visited Turkey to educate the manufacturers on how to dye and finish fabric from Merino yarns.”

The result of this technical transfer means there are now six Turkish knitters with enough confidence to offer Merino wool fabrics in their range, which have been tested against Woolmark standards.

Four flatbed knitters were also targeted, with these manufacturers competent in working with wool, but generally with machine washable yarn.

So strong is The Woolmark Company’s belief in the future for Turkey that it recently increased its number of staff in its Turkey office, headed by country manager Mahmut Kocak.

The Woolmark Company CEO Stuart McCullough said, "We view Turkey as a significant manufacturing market with growing importance for retail. We have recently invested in a new office and to grow the team in Turkey, which is a significant step forward in providing the Turkish industry with support to develop and promote high quality Australian Merino wool products locally and internationally."

With retail and apparel enjoying such a strong presence in Turkey, and coinciding with the success of The Woolmark Company’s technical and innovations transfer, The Woolmark Company brought together UK-based Alexander McQueen CEO Jonathan Akeroyd and famed fashion journalist Colin McDowell to talk at the annual Fashion Apparel Conference in Istanbul about the increasing demand for textile innovation and luxury natural fibres such as Merino wool.