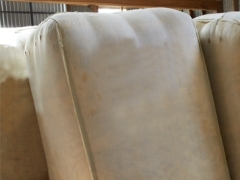 The Australian Wool Production Forecasting Committee (AWPFC) has forecast that Australian wool production will decline to 345 million greasy kilograms for the 2013/14 season, down by 1.4 per cent from the 2012/13 season’s total of 350 million kg.
“The slight decrease in seasonal production reflects two major factors – an increase in sheep turn­off for slaughter in 2012/13, which has reduced season­opening sheep numbers for 2013/14; and an expected reduction in average fleece weight resulting from the dry seasonal conditions that were experienced in many wool growing regions in the first half of 2013,” AWPFC chairman Russell Pattinson said in a press release.
Mr. Pattinson added that “results from the recent joint Meat and Livestock Australia (MLA) and Australian Wool Innovation Ltd. (AWI) production survey indicate that grower intent has shifted back slightly from flock growth, toward maintenance of existing sheep numbers”.
Region-wise, declines in 2013/14 wool production are forecast for New South Wales and Queensland, which outweigh expected slight increases in wool production in Victoria, Tasmania, South Australia and Western Australia.
New South Wales is expected to produce 120 million kg of wool, followed by Victoria, Western Australia and South Australia with 77.7 million kg, 69 million kg and 54.9 million kg, respectively, according to the release.