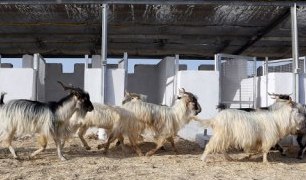 courtesy: afghanmade.com
The Multilateral Investment Guarantee Agency (MIGA), the political risk insurance arm of the World Bank Group, is insuring a cashmere scouring and disinfection facility in Heart province of Afghanistan.
The MIGA-supported project will boost the nascent cashmere industry in Afghanistan, create direct and indirect employment, and transfer technical know-how in a country undergoing a period of transition, a MIGA press release said.
MIGA’s investment guarantees of US$2 million cover equity and shareholder loan investments by Traitex International S.A. of Belgium and a shareholder loan investment by Sodintec Finances S.A. of Luxembourg to Traitex Industry in Afghanistan.
MIGA is insuring the project for up to 10 years against the risks of transfer restriction, expropriation, and war and civil disturbance, which would help the currently underdeveloped Afghan cashmere sector.
Among other challenges, the high percentage of waste material in raw cashmere increases its weight—and therefore transport costs. Competition from other countries where the sector is more developed has meant that Afghan producers and traders have had to keep their prices low.
The Traitex facility in Herat’s Fibers and Textiles Industrial Park will process fiber for export. Traders will be able to command a higher net price for processed Afghan cashmere, stimulating greater harvesting of cashmere goats and increasing income for local herders.
In addition to the indirect employment of herders, the project will also create 35 permanent jobs in an area with limited opportunities and will provide training to Afghan staff.
“Until now Afghanistan has exported almost all of its cashmere in its raw form, as no significant processing has taken place within the country,” said Dominique Godin of Traitex International S.A. in the statement.
“There’s great potential for this industry going forward, and we’re pleased that MIGA’s insurance helped reduce the risk profile of this project so that it can advance,” he added.
MIGA’s executive vice president Keiko Honda said the project is a solid example of how MIGA’s insurance supports foreign direct investment in a fragile context like Afghanistan.