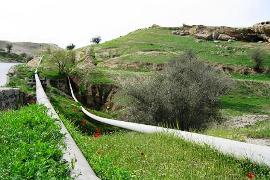 West Ethylene Pipeline/Shana
The construction of second phase of Iran’s 1,500 km West Ethylene Pipeline will be completed by December 2013, according to deputy minister of Petroleum, Abbas She’ri Moqqadam.
According to the deputy minister and new managing director of the National Petrochemical Company (NPC), the pipeline will hasten industrial development in the Western part of Iran, reports Shana News Agency.
Mr. Moqqadam said the national project is progressing well and is predicted to become operational by the end of this year.
The pipeline would carry feedstock to petrochemical plants that lie on its route stretching from Assaluyeh in southern Iran to West Azarbaijan province in north-western Iran, he added.
Earlier, the pipeline was scheduled to be completed and become operational by November 2013 but is now expected to begin operations by December.
The construction of the pipeline began in 2002, and is considered to be the longest ethylene transfer pipeline in the world, which is structured to transfer 150,000 tons of ethylene to the Tabriz Petrochemical Plant. It would also cater to feedstock requirements of Lorestan, Mahabad and Kurdestan petrochemical plants.
Around 14 petrochemical plants, which are either operational or being constructed with an investment of US$ 8.5 billion, lie on the route of the pipeline, which would pass through 11 provinces in the country such as Fars, Khuzestan, Lorestan, Kohguiluyeh Boyer Ahmad, Chahar Mahal va Bakhtiari, Kurdstan, Kermanshah, Ilam, Hamedan, East Azarbaijan and West Azarbaijan.