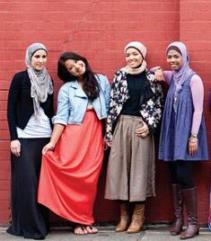 courtesy: Powerhouse Museum
The fast growing popularity of modest Muslim couture in Australia will be once again celebrated through a forthcoming exhibition, featuring a variety of stylish and sophisticated faith clothing.
Titled as ‘Faith, fashion, fusion: Muslim Women’s Style in Australia’, the exhibit will showcase creations from famous Muslim fashion designers like Dima Kattan and Zulfiye.
Slated to be held at the Immigration Museum, Melbourne, from October 10, 2013 to June 2014, the featured exhibits will include loose-fitting cotton and silk ensembles and Islamic hijabs or headscarves.
In addition to clothing, the event will also display a photograph of the first Muslim woman surf lifesaver Mecca Laalaa, posing proudly in her red and yellow two piece burqini, designed by Ahiida Zanetti.
The exhibition will also feature life stories, interviews and personal photographs of influential Australian Muslim women, such as Susan Carland (ex-Australian Muslim of the Year), Sherene Hassan (Director of the Islamic Museum of Australia), Dr Nasya Bahfen (Senior Lecturer of Media and Journalism at UNSW) and writer Randa Abdel-Fattah.