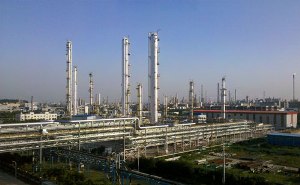 The plant, designed by Wison Engineering Ltd., an indirect non-wholly owned subsidiary of the Group, is located in the Nanjing Chemical Industry Park.

It has successfully produced qualified ethylene and propylene products which meet the requirements set for polymer products, with a passing rate of 99.98% and 99.8% for ethylene and propylene products respectively, marking the first commercialization of Wison Engineering's olefin separation technology for MTO plants, and also demonstrating yet another successful commercialization case of China's coal-to-olefins technology, which will facilitates the coal-to-chemical industry development roadmap in China.

With planned annual production of 300kta of ethylene/ propylene, the MTO plant is one of the production units of Wison (Nanjing) Clean Energy Co., Ltd. ("Wison Clean Energy"). Following the commissioning of the first Shenhua Baotou coal-to-olefin project, the MTO plant marks a new successful initial start-up which not only employs Wison Engineering's MTO technology, but is also the first MTO plant in the world to apply advanced Honeywell UOP industrial MTO technology.

This technology broke the bottleneck in the technological difficulties that existed in the domestic industry; hence, the China National Petroleum & Chemical Planning Institute selected it to be the recommended technology for the "Twelve-Five Coal-to-Olefins Upgrade Demonstration Project", making it one of Wison Engineering's core technologies.

The close cooperation between Wison Engineering and UOP on the technological front has pushed forward the development of domestic MTO technology and the upgrading of the modern coal-to-chemicals industry.

Since its development in 2007, Wison Engineering's separation technology in MTO plant has obtained four domestic invention patents and one invention patent in Indonesia. The technology has been adopted by enterprises such as Shandong Yangmei Hengtong Chemicals, Shenhua Xinjiang New Materials,Jiangsu Sailboat Petrochemical and Pucheng Clean Energy.