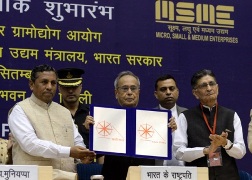 President of India Pranab Mukherjee has launched the Khadi Mark, which would provide a much needed identity to the Khadi as an assurance of purity and genuineness to customers to boost its sale, as a part of the ongoing reform measures in the sector to re-invest it in keeping with the changing time.
With the introduction of Khadi Mark, no textile can be sold or otherwise traded by any person or institution as Khadi or Khadi product in any form or manner without it bearing a Khadi Mark tag, sticker or label.
Khadi Mark Regulations 2013 were notified by the Ministry of Micro, Small and Medium Enterprises (MSMEs) in July this year to ensure the genuineness of Khadi i.e. hand spun and hand woven, containing natural fibers (cotton/wool/silk), and produced in India.
The Khadi and Village Industries Commission (KVIC) will be the Nodal Agency to monitor, verify and enforce the genuineness of products being sold as Khadi.
Launching the Khadi Mark, the President said Khadi remains an important vehicle for the development of rural India. There are at present around 1.045 million Khadi artisans of which seventy per cent are women.
The President said Khadi Mark is a novel initiative and it will indicate the quality and genuineness of a Khadi product. It will provide a distinct identity for positioning and brand building in the domestic and international textile markets.
KH Muniyappa, Minister of MSME, said Khadi production in financial year 2012-13 has been about Rs. 7.62 billion in terms of value.
The Minister highlighted the role and importance of Khadi sector in India and said “Government is supporting implementation of Khadi programme throughout the country and it is now considered as a potential tool for generating employment at the door steps of rural artisans with extremely low capital investment”.
The Minister said that the primary objectives and benefits of introducing Khadi Mark is to create a distinct identity of Khadi, to guarantee the genuineness of Khadi, to improve customer/consumer awareness and to increase popularity of Khadi.
The Minister emphasized that under the Khadi Reform Development Programme (KRDP) direct assistance to 300 existing Khadi institutions will be extended and 50 new Khadi institutions will be organized and managed on Entrepreneurship Model.