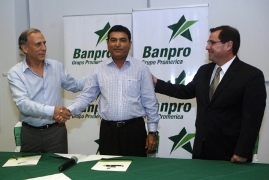 L-R: Mr. Alvaro, Mr. Yusuf, Mr. Rivas/La Prensa
Nicaragua’s Cone Denim mill, located in the free trade zone of the country, has been acquired by Honduran based textile firm Grupo Karim with financial help of US$ 20 million from the country’s Bank of Production (Banpro Promercia), and would be restarting operations from November 1, 2013.
The Honduran textile firm would take charge of the denim mills, now called Pride Denim Mills, which will create around 600 direct jobs initially, and up to 3,000 jobs when operating at full capacity.
Luis Rivas, general manager of Banpro Promercia, said Banpro is providing a bridge loan of US$ 20 million via the National Free Zones Corporation (CNFZ), for the purchase of the assets of the company, and would give them to the operator on sales, which in this case is Grupo Karim, reports La Prensa.
Amdani Yusuf, president of Grupo Karim's in Central America, said that initially the denim mills would be providing employment to over 600 people and within two to three years would create 2,000 to 3,000 new jobs.
The production process should begin by January, 2014, and the mills are expected to produce about 28 million yards of denim annually, he added.
General Alvaro Baltodano, technical secretary of the CNFZ, said the Honduran based textile group is very diversified having different investments in various countries and the CNFZ had been working towards this process of acquirement with the group for a long time.
The textile group would be investing a total of around US$ 30-35 million to restart productions in the denim mills, he added.
The Cone Denim mills had ceased operations in 2009, due to decrease in orders from the US, which was its main buyer, owing to the financial crisis during the time. The company employed 800 people directly at the time.
Grupo Karim is a leading textile firm, having its headquarters in Honduras, and operating in countries such as Mexico, Guatemala and the US.