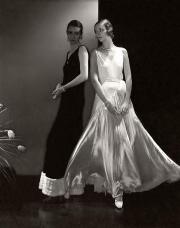 courtesy: Conde Nast Archive
A touring exhibition, showcasing some sumptuous Art Deco-inspired fashion and the works of one of the pioneers of fashion photography Edward Steichen, is going to make a stop at the Melbourne-based art museum National Gallery of Victoria.
Scheduled to be held from October 18, 2013 to March 2, 2014, the event titled as Edward Steichen & Art Deco Fashion will chart the eventful journey of fashion during the 1920s and 1930s alongside a display of some rare fashion images by the famous American modernist illustrator.
Curated by Paola di Trocchio and Susan Van Wyk, the exhibition will showcase a selection of nearly 40 garments and accessories, featuring signature Art Deco motifs, from the leading designers of that era such as Lanvin, Madeleine Vionnet, Madame Paquin and Callot Soeurs.
Sourced from the Australian museum’s international fashion and textiles collection, the to-be-featured sartorial exhibits will include swimsuits, coats, evening gowns, beach pyjamas, dresses as well as a rare Coco Chanel designed Little Black Dress (1924), accentuated with glass beads and ribbon fronds.
In addition to the garments, over 200 of Steichen’s original vintage photographs, drawn from the archives of Condé Nast where he was a chief photographer for their most prestigious publications Vanity Fair and Vogue during the 1920s and 1930s, will also be displayed.
Art Deco style developed in response to changing lifestyles and ideals following the First World War. Typically characterised by sleek, geometric lines, rich colours, shorter hemlines and luxurious adornments, these new forms represented a shift away from traditional values which later culminated in the infamous mid-twenties flapper style dress.