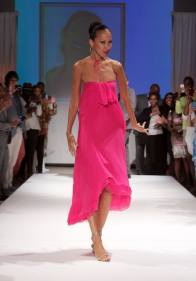 EMERGE! A Fashion Runway Show positioned an eclectic ensemble of artists during New York Fashion Week. These talented and aspiring fashion designers from around the world showcased their artistic genius with amazing collections that powered down the runway.

Highlights included an opening performance with Dubai’s number one DJ, DJ Dion Mavath. Back for another season to host EMERGE! A Fashion Runway Show international model and actress Carissa Rosario alongside cohost Sean Ringgold, who kept the shows special invited guests entertained; Legendary designer, Stephen Burrows presenting to fashion and style icon, Patricia “Pat” Cleveland, dubbed “Queen of the Catwalk”, a woman who has given birth to a culture of glamour, sophistication and innovation, with the coveted ‘Fashion Innovator Award’. The highlight of the evening was when Ms. Cleveland walked the runway in signature ‘Pat Cleveland’ style before accepting her award.

Mark Roscoe has been actively involved in the fashion industry for the past 30 years. Recognizing a market for distinctive, one-of-a-kind pieces that evoke a feeling of timeless elegance, grace, and style, Mark Roscoe has made a name for himself in the fashion world. Impeccably designed and tailored to reflect the true personality of the most discriminating clients, Mark Roscoe’s talent and vision are dedicated to those who wish to “make a statement without uttering a word.”

Persévérer (pur suh vuh day) the French translation for persevere or PRSVR (Passion, Resilience, Sacrifice, Values, Respect) is largely based upon the premise of striving to better ones self, while aspiring to inspire others. In launching PRSVR, the initial collection of leather based luggage and outerwear combines themes of style, versatility, and functionality within each piece.

Danny Nguyen's foundation in the fashion world is rooted in the soil of humility. He began as a child, under the wing of his mother. Predating his arrival to the United States, Danny would be seen at a very early age cutting fabrics, collecting designs and assisting with custodial chores around his mother’s alteration. During this period, he developed and refined many of the essential skills of a fine fashion designer.