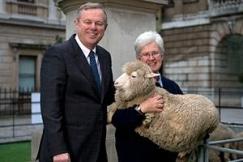 To celebrate the final weekend of the UK's Wool Week, a flock of Australian/English Bowmont Merino sheep made a special appearance in the Royal Academy's courtyard over the weekend. Wool Week is the Campaign for Wool's annual UK festival to highlight wool as a natural, renewable and biodegradable fibre.

The Bowmont Merinos are a new breed of British sheep, specially bred for their soft, fine wool, by Lesley Prior in Devon. In 1988 the Macaulay Institute in Scotland crossed Australian Saxon Merino rams with Shetland ewes, regularly adding more Australian genetics to refine the wool and improve consistency.

Since 2005/6 Lesley Prior continued the work using selective breeding to produce wool between 14 and 18 microns in diameter. Average British wool is about 30 microns and human hair normally averages about 70 microns. The genetic nature of the wool brought by the Merino gene lends itself to extra-fine apparel wear, in contrast to typically coarser British wools.

As Australia is the world's largest producer of Merino wool, The Woolmark Company and the Campaign for Wool are proud supporters of the Royal Academy's Australia exhibition, the most significant survey of Australian art ever mounted in the UK. His Royal Highness The Prince of Wales is both the Patron of the exhibition and The Campaign for Wool.

For a second year running the Wool School has seen students introduced to a retail partner and given the opportunity to design a wool jumper for their company, keeping this year's theme 'knitwear traditions of the British Isles' front of mind. The program received thousands of entries and one student per retailer was selected. 15 jumper designs have been developed and manufactured and were available in stores to coincide with UK Wool Week.

Five per cent of Wool School jumper sales will go back into fashion education programmes across the UK.

This year Wool Week celebrated haberdashery and encouraged the nation to pick up knitting needles. An exciting partnership with John Lewis saw a week-long agenda of fashion-forward knitting and wool craft classes hosted by some of the UK's finest knitwear specialists at both Edinburgh and London stores.

John Lewis' partners such as Erika Knight, Rowan, Arne & Carlos and Milamia created bespoke patterns and demonstrated techniques for all skill levels, showcasing knitting in its most contemporary form. John Lewis' Oxford Street window came to life as live knitters knitted their way around a plain white room setting - the installation, developed over the course of Wool Week, emerging as a flurry of colourful knit patterns.