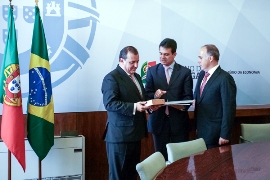 L-R: Mathias, Salles, John/Mundo Lusiada
The Commercial and Industrial Association of Barcelos (ACIB), in the North of Portugal, has signed an agreement with the government of Brazilian state of Bahia, with the support of local investors to set up the Portuguese firm Polo Industrial Textiles’ manufacturing plant in the Brazilian region.
The agreement was signed by ACIB president John Albuquerque and Eduardo Salles, state secretary of Agriculture of the state government of Bahia, in the presence of Portuguese Government Secretary of Economy, Leonardo Mathias, reports Portuguese newspaper in Brazil Mundo Lusiada.
ACIB president John Albuquerque, said the textile plant, with the favorable conditions that the government of Bahia state grants, would be able to provide direct access of the Brazilian market to the Portuguese firm.
At the signing ceremony, Eduardo Salles, secretary of state of Bahia government reaffirmed that the regional government will ensure that Polo Industrial Textiles and the ACIB would have maximum support in terms of public credit and banking, to enable its viability in Bahia.
Leonardo Mathias, Portuguese secretary of Economy, welcomed the work of ACIB and ensured the support of Portuguese Government for aiding the firm in the investment, and would be providing all sorts of support for setting up the textile manufacturing plant in Bahia, including granting credit and tax exemptions.
Last month, the ACIB signed a memorandum of understanding (MoU) with the state of Bahia, to promote establishment of Bahia’s industries, including textiles, in North Portugal.