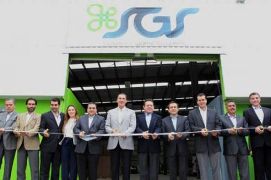 courtesy: pueblaonline.com
Mexico’s Minister of Economy, Ildefonso Guajardo Villarreal, has inaugurated a new textile plant of Seamless Global Solutions (SGS) in Puebla, according to a press release from the office of Puebla Governor.
Inaugurating the plant, Mr. Guajardo said companies like SGS would have to bet on innovation in order to be able to compete with international markets.
Francisco Rivera Taja, CEO of SGS, said Puebla is known for manufacturing products that can compete globally.
He said the company has invested more than US$ 15 million in the new plant, generating over 400 direct and 200 indirect jobs, with 70 percent of them being women.
SGS is a company belonging to the P.I. Mabe Group, which mainly focuses on manufacturing and marketing of disposable hygiene products.
Speaking at the inauguration, Puebla Governor Rafael Moreno Valle said the state creates conditions to maintain and attract domestic and foreign investment.
He said that one of the fundamental tasks of the government is to create the conditions for enterprise development and training of new generations, so they can absorbed properly in the labor market. Hence, Puebla State lays stress on strengthening quality education as an element of competitiveness, he added.
He said his government has made the largest investment in infrastructure in the state’s history, which creates confidence in investors and translates into jobs for Puebla citizens and drives the state’s economy.
He congratulated P.I. Mabe Group president Gilberto Marin Quintero for his vision to set up the textile industry in the state.
Pueblo’s textile industry creates new niches and opportunities to be innovative and use new technologies, he added.