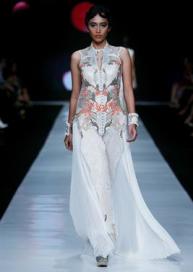 The most awaited show of the 2014 Jakarta Fashion Week was the finale “Dewi Fashion Knights” fashion show hosted by Dewi magazine.

Bringing the theme “Tale of the Goddess”, Dewi Fashion Knights presented the collections of five selected designers/brands: Oscar Lawalata, Populo Batik, Priyo Oktaviono, Tex Saverio and Toton Januar. They were challenged to design based on their interpretations of a goddess.

The show was opened by Oscar’s collection named “My Name Is Andromeda”. He described the modern and intelligent Indonesian women through the edgy designs mixed with wool weaving and black silk materials.

The collection highly complimented the female body as the fabrics were sewn without using patterns. Not only black, Oscar also used variation of colors with geometrical pattern. The vibration of the design was apparent in bold orange, blue and pink.

Populo Batik, that was for the first time participated in the Dewi Fashion Knights, revealed the urban side of Indonesia. The whole collection used batik that looked so different from the usual batik traditional clothes. Instead, Populo Batik showed casual clothes like short pants, tank tops and culottes. The modernly designed collection is also available for men.

Toton was up next as he presenting took the Indonesian seas as inspiration. The collection titled “The Sultan and the Mermaid Queen: Abbys” was very luxurious in silk and brocade. The sea accents were apparent in accessories like pearl necklaces and earrings. With colors like white, blue and orange, Toton pointed out the soft and romantic image of Indonesian women.

The show continued with Priyo Oktaviono presenting his “Galore” collection. As the title suggests, the collection indeed looked galore. Inspired by the French baroque architecture, Priyo showcased the androgyny collection resembling the Napoleonic soldier uniform. Despite the black and gold colors and studded accents, the collection was still feminine due to the flamboyant ruffles.

Closing the Dewi Fashion Knights show, the most awaited Tex Saverio revealed his “Exoskeleton” collection. The collection consisted of 3D pieces using chain-mail materials found in the corsets and masks.

Both items were blended with the velvet and metallic dresses, thus creating the warrior look. Through these dresses, it was like Tex wanted to tell the world that the Indonesia’s fashion industry is ready to enter a bigger ‘war’, which is the global fashion market.