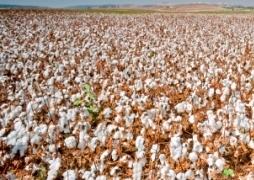 The cotton growers of Uzbekistan have collected over 3.35 million tons of raw cotton, said Uzbek President Islam Karimov congratulating the cotton farmers in the country.
In a statement, the Uzbek President congratulated the cotton growers for their achievement and their contribution towards further improving the living standards and welfare of the people, as well as for the development of the economy and the country as a whole.
Mr. Karimov said this feat was achieved despite bad weather conditions in spring as temperature in the country during spring season was low due to heavy rains which resulted in late planting of cotton.
The President said that this season the cotton growers had to exert a lot of effort to mobilize all available resources and opportunities and this was supported by the effective use of skillful intensive agricultural technologies by farmers, especially by using more than 10 million tons of organic fertilizer, 10 tons per hectare of land cultivated for cotton.
According to preliminary estimates, this year the gross income from cotton production will exceed 3.1 trillion soms—23 percent more than last year, which in turn will raise the interest of farmers and result into the effective implementation of the tasks outlined in the ‘Year of well-being and prosperity’ and other national programs, he added.
Mr. Karimov also informed that the country has implemented its five year land reclamation program, as around 1.46 million hectares of irrigated land were improved in the country during the last five years with an investment of 1 trillion soms to implement the program.
Over 90 percent of harvested cotton this season was high grade cotton, he added.