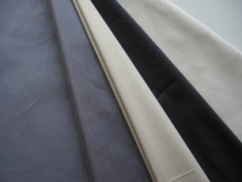 The exports of textiles from Iran shot up by 13 percent year-on-year in the first half of the current Iranian calendar year beginning March 21, 2013, director general of Department of Weaving and Textile Industries of the Ministry of Industry, Mines and Trade, has announced, Tehran Times reported.
The textile industry accounts for 11 percent of production units and 12 percent of employment in Iran’s industrial sector, Ne’matollah Mardani said.
In Iran, over 95 percent of textile production units are owned by the private sector, he added.
Speaking about the recently concluded 19th international exhibition on textile industry and related machinery (IRANTEX 2013), the official said the event saw 69 percent increase in number of participants compared to last year.
Around 132 Iranian companies and 92 foreign companies from 14 countries—India, China, South Korea, Taiwan, Spain, Italy, Turkey, Pakistan, Germany, Greece, Singapore, Switzerland, Japan and Finland—showcased their latest textile products and technology at the 4-day event.
The Association of Iran Textile Industries (AITI) expects the country’s textile exports to touch US$ 1.1 billion during the current Iranian calendar year.

UK economy not hit as hard by COVID as expected: Chancellor Sunak

Painting a positive picture of the health of the UK economy as it...

China and the US should join hands to create conditions to implement...

Warehouse transformation is in the offing