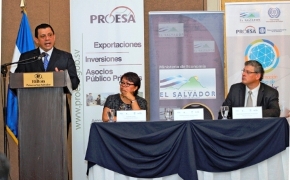 (L) Minister Hernandez at the seminar
The Government of Central American country of El Salvador through its Agency for Promotion of Exports and Investments (PROESA) conducted a seminar for the textile and clothing sector of the country, in order to identify new opportunities and access markets through utilizing the benefits from Free Trade Agreements (FTA), especially with the US.
According to a statement issued by Ministry of Economy of El Salvador, the seminar, held under the theme ‘Identifying new opportunities for textile and clothing sector under trade agreements’, addressed the issues of major requirements of the domestic textile and garment industry, in order to sell products in the US, with special emphasis laid on the Government procurement issue.
During the seminar, Mario Roger Hernandez, Deputy Minister of Economy, said that selling products to foreign Governments is a new way of doing business and this requires having the right information and timely advice that allows companies to identify opportunities in this area.
Through the Productive Transformation Program (PTP), the Salvadoran Government has identified sectors in the country with most growth prospects in the short term, and initiated the training program with the textile and clothing industry, as it accounted for nearly 16.3 percent of the total industrial Gross Domestic Product (GDP) in the country last year, with over 41 percent of contribution in overall exports, he added.
The Deputy Minister of Economy said, in order to promote productive transformation in the sector, the Salvadoran Government is also making significant efforts to bring different initiatives for business support, and has identified a series of actions that will contribute to economic diversification of assets as well as development of high productivity services in the sector.
The Government would be developing a series of training events to strengthen the human resource for contributing towards the identification of new business opportunities, especially for the textile and clothing sector, he added.
Eliel Hasson, a consultant from Chile, said trade agreements with other countries provide many commercial opportunities for the domestic textile and clothing entrepreneurs to sell their products to major trading partners of El Salvador, and this can also help in giving an impetus to the internalization process in foreign companies, and organizations.
Mr. Hasson said El Salvador has become the ninth highest supplier of apparel to the US, exporting majorly knitwear, cotton innerwear, socks, and cotton as well as synthetic fibers among others.
Over 50 representatives from the textile and clothing sector enterprises attended the seminar which was organised as a part of the PTP, an interagency effort betweenthe Ministry of Economy (MINEC), PROESA and the Central Reserve Bank (BCR), which aims to lay the foundation for sustained economic growth, increased exports and employment in various industrial sectors of the country.