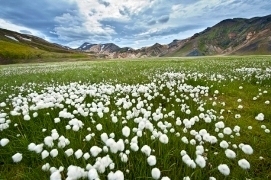 The President of the west Central African country of Cameroon, Paul Biya, has signed a decree authorizing the Minister of Economy of the country, Emmanuel Nganou Djoumessi, for a loan agreement of €13 million with the Islamic Trade Finance Corporation (ITFC), a subsidiary of the Islamic Development Bank (IDB), in order to finance the 2013-14 cotton harvest period in the country.
According to a statement issued by the President’s website, the loan would be utilized by the Society of Cotton Development (SODECOTTON) of Cameroon for financing the next season of cotton harvest in the country.
The Decree No. 2013/404, signed by the President on November 8, 2013, states that The Minister of Economy, Planning and Regional Development, is empowered with the right to delegate and sign with the ITFC, a loan agreement to the tune of €13 million (8 billion CFA francs) to finance 2013-14 cotton season in the country.
In January 2013, for the previous cotton harvest period, the SODECOTTON had benefitted from 5 Cameroonian banks, which provided a credit of 15 billion CFA francs, under the leadership of Commercial Bank of Cameroon (CBC), to the agency for cotton harvest.
In September 2013, The National Confederation of Cotton Producers of Cameroon (CNPCC) has planned to achieve the target of growing 260,000 tons of cotton for the harvest period of 2013-14, and launched a cotton harvest campaign in the country from October.
During the 2012-13 harvest period, Cameroon was able to achieve around 230,000 tons of cotton which was less than the projected cotton output of 250,000 tons, owing to heavy rains because of which large areas of cultivation in the country were destroyed.