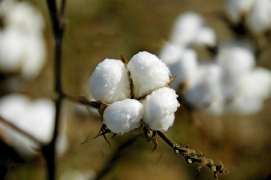 The production and quality of cotton in the Southeast European country of Greece, during the harvest season that ended in October 2013, was very good owing to the favorable weather conditions, announced Greek Deputy Minister of Rural Development and Food, Maximos Charakopoulos.
According to a statement issued by the Ministry, the Deputy Minister said the quality of the crop and production was very high, however, the cotton growers in the country should prepare the soil immediately after the harvest, in order to maintain the quality of cotton production in the country.
Mr. Charakopoulos urged cotton growers in the country to consult agronomists from the Regional Center of Plant Protection and Quality Control and the local Delegation of the Association of Agronomists Laconia (DAOK), to take necessary steps under the Agricultural Warnings for pest management in cotton.
According to the Deputy Minister, there were fewer problems of green or pink worm pests during the harvest period that ended on October 31st, and the Ministry aims that this should be continued in the next cotton cultivation period which began from November 1, 2013.
It is necessary to take immediate actions for cultivation after harvest and the farmers should ensure commercial planting and plowing the soil in depth to avoid larvae attacks which harm the cotton production, he added.
The Deputy Minister urged the cotton farmers in the country to remain proactive during this cotton sowing period, as any lack of preparation shall harm the soil which would damage the crop and result into a decline in the production of the crop.
Mr. Charakopoulos said that the Government, on its part, to enhance the liquidity of the cotton growers in the country, will fully implement its commitment to return the Special Consumption Tax to the farmers.
Despite the financial crisis faced by the country, the Government would continue its support to the farmers and focus on one of its primary goals to enhance production of cotton in Greece, he added.