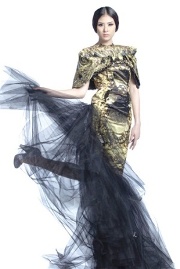 courtesy: VN Times/VNS
In a bid to mark the 40th anniversary of Vietnam-Italy diplomatic relations, a one of a kind outdoor fashion show was organized recently in the Vietnamese capital city of Hanoi.
Titled as ‘Angles of Italy’, the runway event, hosted in collaboration with the Italian Embassy in Vietnam, was organized with the primary aim to boost the Asian country’s burgeoning fashion industry.
The show featured an array of sumptuous designs created by two of the most talented fashion labels of the nation—Cong Khanh and Minh Hanh.
Inspired from the European Renaissance, the young design talent Khanh presented a 30-piece collection made from iridescent Vietnamese satin fabric.
Seasoned designer Hanh took inspiration from her recent trip to Italy for her bold crocodile leather, tribal brocade and 3D embroidery heavy line.
Made using raw linen textiles, woven by H’Mong people in Ha Giang Province, the featured ensembles were influenced by the gothic art and architectural aesthetics of Turin.
Other than the designs displayed for adults, the fashion show also featured a unique parade showcasing Vietnam-based Italian children clad in traditional ao dai costumes.
In addition to the fashion show, an exhibition highlighting creations from renowned Italian designers like Fernanda and Raniero Gattinoni is also going on at the Italian Cultural Centre in Hanoi.
The exhibit, also being held as part of the celebrations to mark the 40th anniversary of diplomatic ties between the two nations, is scheduled to run till November 20, 2013.
The featured exhibits include costumes worn by the unforgettable Ingrid Begman in Hollywood movies like ‘Europe 51’ (1952) and ‘Cactus flower’ (1969).