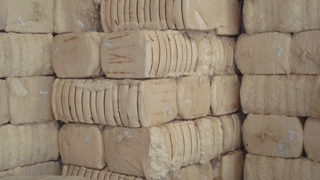 Textile mills in China have bought a total of 7.09 million tons of cotton from January to October this year, according to the latest report released by the China Cotton Association.
Of the 7.09 million tons, 3.72 million tons of raw material came from the cotton sold from the reserves from the beginning of the year to the end of July, while another 3.37 million tons of cotton was imported from January to October, according to the report.
At present, as former inventory and import quotas have been exhausted in mills, some of them have started to buy from the domestic open market.
On the other hand, the temporary purchase and storage of cotton continued and by November 15, buying in 2013-14 season reached 2.165 million tons, of which 1.107 million tons came from Xinjiang, 468,000 tons from inland, and 590,000 tons came from key enterprises.
According to statistics, Xinjiang cotton accounted for 78.03 percent of the total cotton purchased for state reserved during the current season, while Hubei, Shandong and Hebei provinces contributed 5.67 percent, 4.20 percent and 3.93 percent, respectively.

The COVID-19 pandemic will drive the world economy into recession...

Bangladesh has recently sought $1 billion in support from the...

Cambodia to explore FTA with EAEU with Russian help