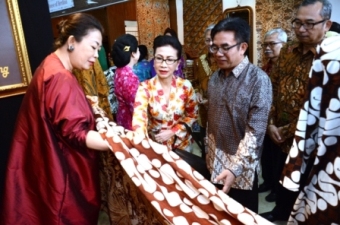 Mr. Susanto at the expo/c: http://kemenperin.go.id
The exports of Indonesian batik industry have grown manifold from mere US$ 32 million in 2008 to $300 million in 2013, Panggah Susanto, Director General of Manufacturing-based Industry in the Ministry of Industry, has said.
Speaking at the inauguration of the four-day Batik Cultural Heritage Exhibition in Jakarta Selatan, Mr. Susanto said the fast growth in exports shows demand for batik in international markets, especially in the US, South Korea and Germany.
Despite the fast-paced growth, batik accounted for only a fraction of Indonesia’s total textile and apparel exports valued at around $13 billion in 2013, he added.
Ministry of Industry’s Secretary-General Busharmaidi said that nearly 20 percent of about 3.4 million SMEs in Indonesia were engaged in batik production and allied businesses. He added that premium batik sellers, who make up only 5 percent of all batik businesses, contribute half of the total industry revenue.
In view of the single-market Asean Economic Community (AEC) becoming operational next year, Mr. Busharmaidi said Indonesian batik producers should be empowered both in production as well as marketing of their products.
He said most batik SMEs need support in order to be able to better compete in the Asean market.
54 batik SMEs form Solo, Yogyakarta, Bandung, Cirebon, Surabaya, Pekalongan, Surakarta, Banjarnegara, Madura and Jakarta are participating in the exhibition, which is scheduled to go on till October 3, 2014.
Indonesia celebrates October 2 as National Batik Day. To commemorate the day, a fashion show by eight renowned fashion designers will be held at the exhibition. (RKS)