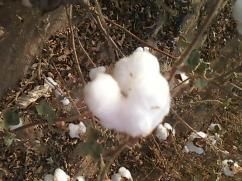 The Cotton Association of India (CAI), a cotton trade body, has downwardly revised India’s 2014-15 season cotton output to 402 lakh bales (of 170 kg each) in its November estimate, from its earlier estimate of 405.50 lakh bales.
According to CAI data, India’s 203-14 cotton production stood at 407.25 lakh bales.
The lower cotton harvest in the current season compared to last year is due to slight decline in productivity in Gujarat, a leading cotton producing state in the country, CAI said, according to a news agency report.
In its November estimate, CAI projects Gujarat cotton crop this season at 122 lakh bales, as against last year’s production of 129.25 lakh bales.
According to the cotton balance sheet prepared by the CAI, 2014-15 cotton supply will be at 473.90 lakh bales, while consumption by domestic textile mills will be 306 lakh bales.
At a recent conference in Mumbai, CAI president Dhiren Sheth said the Indian cotton industry has made rapid strides in several areas like productivity, production, acreage, export and consumption.
However, cotton yields have now saturated after witnessing marked improvements mainly from adoption of GM technology and encouraging Government policies, he added. (RKS)