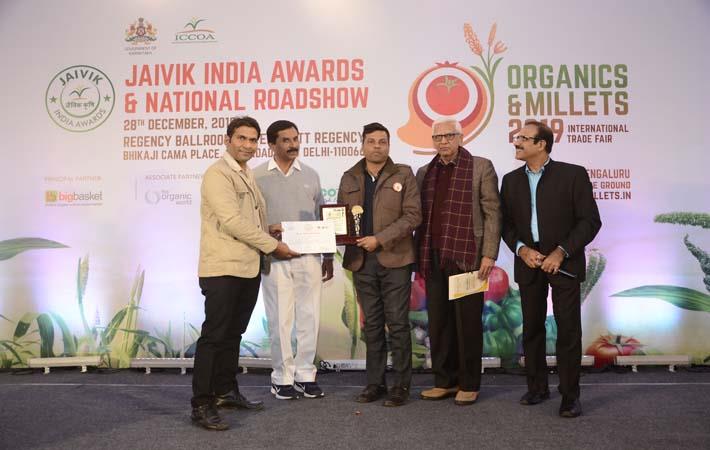 Courtesy: Pratibha Syntex
Pratibha Syntex has won Jaivik India Award for farming initiative Vasudha Organic, in the category of Direct Farmer Linkage. The award was given by International Competence Centre for Organic Agriculture, dedicated for a 'knowledge and learning centre' for all facets of organic agriculture, while working as an interface organisation for the organic movement.

Vasudha Organic has aligned with Sustainable Development Goals (SDGs), which has been adopted by all United Nations Member States in 2015. SDGs provide a shared blueprint for peace and prosperity for people and the planet, now and into the future.

While once farmers were totally dependent on market for farming inputs, Pratibha, through Vasudha Organic, has attempted to turn the table. With its enormous efforts, today farmers are trained to produce organic farm inputs by themselves. The effort has impacted on farmers’ lives significantly, as this has reduced cost of cultivation by 40 per cent, and dependence on market has also reduced substantially, Pratibha Syntex said in a press release.

Keeping farmers at the centre of the development, Shreyaskar Chaudhary, managing director of Pratibha Syntex Limited, said, "Vasudha team is working with farmers to develop innovative multi-cropping system for both seasons, which have potential to substantially increase the per acre income. This not only has a positive economic impact but also enhances biodiversity and efficient utilisation of water and other resources. We aim at increasing farmers’ income four times by 2020. In a bid to attain the target, we have implemented strategic and technical interventions in farming practices, which have turned out to be a boon for the farming community."

"When Pratibha Syntex commenced Vasudha initiative, the main problem was farmers’ total dependency on chemical inputs. To convert them to organic, there was a grave need of creating awareness and training. So, we established training modules and organised workshops for farmers at various places. Gradually we used technology and incorporated social media in our training modules. We have been making videos on various agriculture techniques and putting them on our YouTube channel and sharing the same on WhatsApp, besides sending audio messages to farmers through mobile," Chaudhary added.

In a recent addition to the initiative, Pratibha has started creating a market linkage for the non-cotton organic produce of farmers. This would mean a holistic and one point solution for the farmers for their produce, besides getting the right price. (RR)

Scottish businesses, including textile firms, are set to benefit from ...