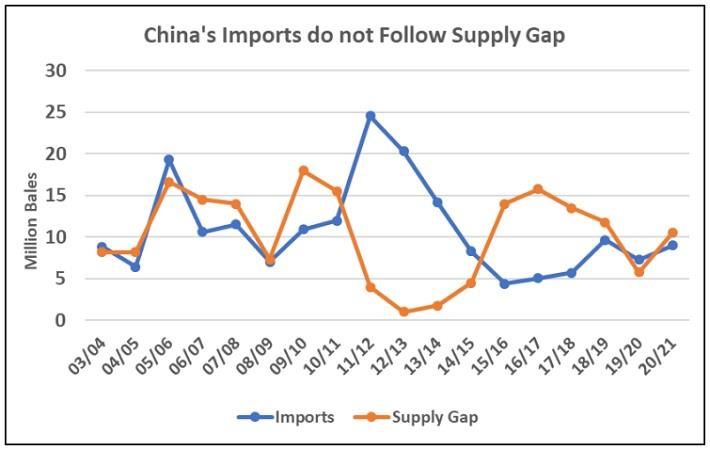 For most cotton spinning countries, import demand is largely driven by the supply gap between production and consumption. However, China has been an outlier. The country’s trade has shown little correlation between its imports and its supply gap over the last decade; for example, 2011-12 imports doubled and reached nearly 25 million bales while the supply gap fell by 75 per cent to 4 million bales. "The disconnect between the supply gap and import volume was due to the fluctuations the level of China’s state reserve," the Foreign Agricultural Service of the US department of agriculture (USDA) said in its July 2020 report 'Cotton: World Markets and  Trade'.

Since China’s accession to the WTO in 2001, the state reserve has bought or sold nearly 200 million bales of cotton; and state reserve holdings have changed by up to nearly 20 million bales in a single year. "The reasons for state reserve activity have been both external and internal – external being the global price shocks of 2008 and 2010, while the policy of shifting production to Xinjiang served internal purposes," the report said.

"Year-to-year state reserve activity has had a major impact on China’s imports, as some years cotton released from the reserve reduced demand for imported cotton and in other years purchases bolstered import demand," the report added.

Following annual auctions of the world’s largest cotton reserves in the years starting after 2013-14, USDA is now estimating that China’s state reserve has reached the government’s preferred level. Nearly 10 million bales are estimated to remain – a level consistent with the government’s objectives and down from nearly 60 million bales in March 2014. "USDA predicts a strategy of rotation going forward and minimal net changes in stock levels, with the state reserve auctioning old-crop and replacing with both new-crop domestic cotton and imports. This would imply that for the first time in over a decade that import demand in China will largely be based on the supply gap," the USDA report said.

However, COVID-19 has sharply reduced China’s spinning activity, and therefore import demand in 2019-20 and to some extent into 2020-21. "Looking ahead, demand is expected to recover from the COVID-19 impacts. Production in the inland areas is likely to continue its decline, while area expansion in Xinjiang is limited and the USDA Baseline forecasts total production to grow modestly. If China’s consumption increases at or near the expected global rate of growth, then import demand will still witness steady growth, albeit somewhat limited," said the report.