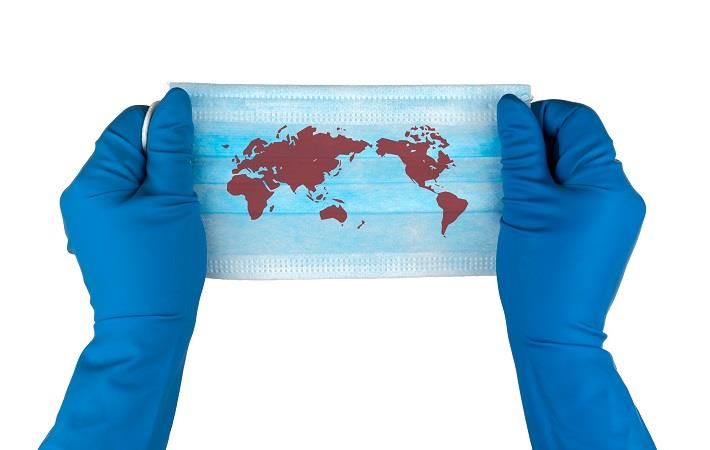 Pic: Shutterstock
The global response this week to the unfolding COVID-19 crisis saw countries implementing countrywide or partial lockdowns, announcement of stimulus packages and relief measures to tackle the harsh economic impact of the pandemic, further closures of outlets by brands and retailers and accelerated production of personal protective equipment (PPE). Dipesh Satapathy takes a look.

The G-20 countries on March 26 pledged to inject over $5 trillion into the global economy to counter the fallout of the COVID-19 pandemic. In a statement issued after the extraordinary G-20 virtual summit, its leaders said they will continue with bold and large-scale fiscal support, which will amplify the actions’ impact and ensure coherence.

Brand and retailers dealing with apparel, footwear and fashion across the United States and Europe have mostly closed their stores, either fully or partially, and continue to monitor the situation unfolding. Some fashion houses have taken the initiative to provide medical staff with adequate face masks and protection gowns.

The Organisation for Economic Cooperation and Development (OECD) recently called for sweeping joint action by governments to defeat the threats from the pandemic and better coordinate their efforts. OECD would offer immediate support to policymakers combating the crisis through a new online policy hub.

The International Labour Organisation predicted that the resulting economic and labour crisis could increase global unemployment by almost 25 million. World trade may sharply fall due, according to the World Trade Organisation.

Morgan Stanley expects economic growth to dip close to the levels during the 2008 global financial crises and US growth to a 74-year low in 2020. Assuming new confirmed cases peak in April-May, growth should start recovering from the third quarter with an aggressive monetary and fiscal policy response, it said. The key risk, however, is the disruption continuing beyond the second quarter.

Deutsche Bank foresees a severe global recession in the first half of this year, with aggregate demand plunging in China in the first quarter by about 32 per cent and in the Euro Area and the United States in the second quarter, by 24 per cent and 13 per cent respectively. The crisis is crushing global gross domestic product (GDP) growth and the world is in ‘recession territory’, Fitch Ratings said.

Prime Minister Narendra Modi on March 25 announced a 21-day country-wide lockdown. Two-days before, he interacted with representatives from several industry chambers via a video conference to discuss growth amid the crisis. In the days that followed, several government measures were announced to mitigate the impact of the crisis.

Apart from announcing liquidity measures, the Reserve Bank of India took steps to mitigate the burden of debt servicing brought about by COVID-19 disruptions. The steps include moratorium on term loans, deferring interest payments on working capital and easing of working capital financing.

Finance minister Nirmana Sitharaman announced a ₹1.7-trillion economic stimulus package to help the poor and migrants tackle difficulties. The measures include direct cash transfers under the Direct Benefit Transfer scheme and food security-related steps aimed at offering relief to the poor workers hit by the lockdown.

The State Bank of India made available a COVID 19 Emergency Credit Line, which will be in force till June 30, and announced offering 0.25 per cent of its annual profit for 2019-20 to fight COVID-19 by supporting health care for the underprivileged.

The ministry of textiles set up an emergency control room to monitor production and supply of medical textiles. Textiles minister Smriti Irani appealed to foreign buyers not to cancel orders already placed. Prototypes of PPE garments by six Indian firms passed required tests and its supplies were augmented.

The Apparel Export Promotion Council urged the government for an amnesty scheme in case there is non-fulfilment of export obligations as traders are facing issues with raw material supply. Garment exporters in Tiruppur and home textile exporters in Karur stopped production from March 24. Indian fashion brands, meanwhile, continued focusing on e-commerce.

Prime Minister Sheikh Hasina announced a stimulus package of Tk 5,000 crore to help export-oriented industries. Global buyers have cancelled or put on hold orders of readymade garments from Bangladesh as many fashion brands have shut their stores in Europe and North America. Dhaka fears losing around $2 billion worth export orders.

Germany has assured its full support to the country’s garment sector in coping with the fallout. The Bangladesh Garment Manufacturers and Exporters Association announced garment workers will receive their monthly wages on time.

HSBC Bangladesh announced measures to help textile and garments clients. It will offer special short-term loans of up to one year with principal moratorium for four months, which can be used for supporting payroll bill and utility payment. It will also allow a three-month moratorium on existing term loans.

A coalition of iconic American apparel brands and textile companies responded to the urgent call of the White House for medical supplies, and joined hands to quickly build a supply chain and fast-track the manufacturing of medical face masks.

US athletic performance apparel, footwear and accessories brand Under Armour announced donating $1 million to feed America to support hunger relief efforts as a result of current school closures and quarantines resulting from the pandemic.

As Prime Minister Boris Johnson tested positive for the novel coronavirus, the United Kingdom temporarily relaxed clauses of the Competition Law as part of measures to allow supermarkets to work together to feed the nation. Retailers can now share data with each other on stock levels, cooperate to keep shops open, or share distribution depots and delivery vans, and to pool staff with one another to help meet demand.

The number of declared coronavirus cases in Europe reportedly crossed 250,000, more than half of which are in Italy and Spain. The Italian government announced an aid package of up to €25-billion to offset the impact. The National Chamber of Italian Fashion submitted to the government its proposals to support the fashion industry. Fashion capital Milan is a ghost town now. The Italian fashion industry’s annual turnover is worth nearly €90 billion.

France on March 27 extended a national lockdown—initiated on March 17—until April 15 after reporting its biggest daily death toll from COVID-19. Prime Minister Edouward Philippe warned things will be ‘difficult’ in the coming days. Labour minister Muriel Pénicaud announced 25 measures, including a help package for self-employed workers. Spain too extended its lockdown on March 26.

LVMH Moët Hennessy Louis Vuitton pledged to help address the surgical mask shortage in France. It managed to secure an order with a Chinese industrial supplier for a delivery of 10 million masks in the coming days.

Belgium-based European Apparel and Textiles Confederation (EURATEX) created a database of offers and requests for material, capacity or support for production of face masks, and other relevant information. It also called for stronger coordination and cooperation among the European Union and its member states.

Myanmar announced a stimulus package to tackle the crisis that include $70 million worth loans, eased deadlines for tax payments and tax exemptions for affected businesses.

Brandix Pvt Ltd offered its garments factory in Ponnani in Sri Lanka’s Eastern Province to be used as a quarantine centre for COVID-19 victims.

The Garment Manufacturers Association in Cambodia urged buyers not to suspend shipments of already-produced goods and those under production.

The All Pakistan Textile Mills Association (APTMA) urged the government to take drastic measures to save the textile industry. The steps suggested include releasing the backlog of sales tax refunds and a further reduction in the discount rate by the State Bank of Pakistan.

More than 40 nations in Africa have reported the disease. The situation is very worrying, with a ‘dramatic evolution’ of the pandemic there, said the World Health Organisation. Many countries like South Africa, Kenya, Ghana and Gabon have banned flights from affected countries. Rwanda, Mali, and the Democratic Republic of the Congo have added quarantine measures for travellers from affected countries.

South Africa plans to erect a fence on its border with Zimbabwe to keep out potentially infected migrants. The National Bargaining Council for the Clothing Manufacturing Industry in South Africa ratified the country’s first COVID-19 Lockdown National Collective Agreement. The salient features of the agreement include guaranteed full pay for a six-week lockdown period for 80,000 clothing industry workers and setting up of a Clothing Industry COVID-19 Lockdown Rapid Response Task Team.

In Ethiopia and Kenya, hundreds of thousands of garment industry workers risk losing jobs if no steps are taken. The Central Bank of Kenya released Sh 7.4 billion to support government efforts to tackle the spread of COVID-19 in the country.

The reported number of COVID-19 cases in South America is relatively lower, with Brazil reporting the highest. Colombia, Chile, Venezuela, Guatemala and El Salvador have closed their borders. Most of these countries have also restricted movements, advising social distancing and self-quarantine.

When things are at the worse, they begin to mend. The proverb seems to offer some solace to people around the world now.

The Shradhdha Group of companies was established in 2010 and is based out...