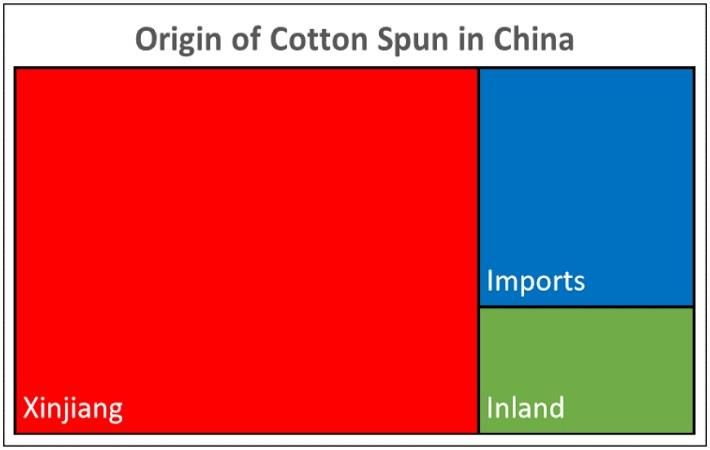 Pic: USDA/FAS
Xinjiang Uyghur Autonomous Region (XUAR) in China accounts for 86 per cent of all cotton produced in China. The province also spins around 70 per cent of all cotton spun into yarn in China, and hence the vast majority of China’s yarn exports. And roughly three-quarters of China's fabric exports are likely of Xinjiang cotton, according to the USDA.

In the 2019-20 marketing year, China accounted for just over 22 per cent of total world cotton production, of which 86 per cent of that was produced in XUAR (just under 20 per cent of the world total). China exports only a small amount of cotton lint, half-of-one-percent of production. Other than some minor exports to North Korea, most remaining exports are reexports of foreign cotton from consignment warehouses. In addition, China is the world’s largest importer of cotton. This provides China with a supply of cotton normally greater than one-third of world use and nearly 40 per cent larger than India, the Foreign Agricultural Service of the USDA said in its September 2020 report 'Cotton: World Markets and Trade'.

China is a top-ten importer of cotton yarn, with Vietnam being the largest supplier providing nearly half of China’s imports. Vietnam relies almost solely on imported cotton for its cotton spinning sector, and exports over half of yarn production to China. The United States supplied over half of Vietnam’s cotton import last season; in fact, US exports to Vietnam were more than 50 per cent greater than US domestic use and over three-quarters as large as US cotton exports to China.

China is also a top exporter of cotton yarn along with India, Pakistan, Vietnam and Uzbekistan. "The vast majority of China’s yarn exports would be Xinjiang cotton, as much of the yarn produced with imported cotton is destined for further processing within China," the report said.

China’s top markets for cotton yarn exports are Vietnam, Pakistan, and Bangladesh, which are major suppliers of textile and apparel for the United States.

China exports cotton fabric to over 120 countries, accounting for around one-third of global trade. "Roughly three-quarters of fabric exports are likely of Xinjiang cotton," according to the report. Bangladesh, Vietnam, and the Philippines are the top markets for China’s fabric.

Xinjiang Uyghur Autonomous Region (XUAR) in China accounts for 86 per cent of all cotton produced in China. The province also spins around 70 per cent of all cotton spun into yarn in China, and hence the vast majority of China's yarn exports. And roughly three-quarters of China's fabric exports are likely of Xinjiang cotton, according to the USDA.
More United States Department of Agriculture (USDA) News... More Textiles News - United States Of America...