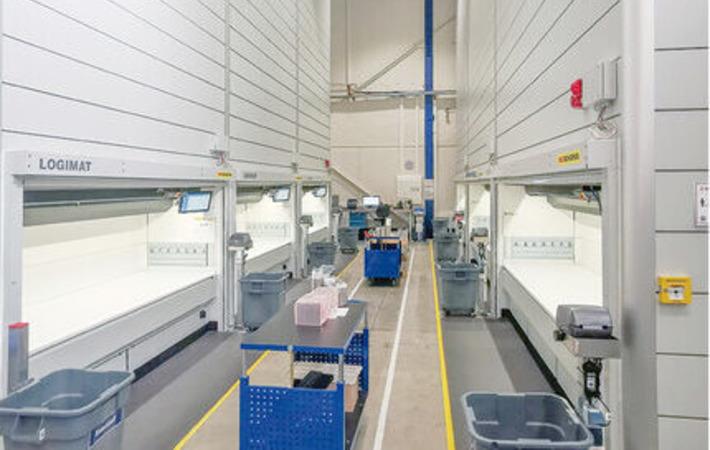 Pic: Oerlikon
In order to further optimise the material provision for the Oerlikon Neumag and Oerlikon Nonwoven business units and to strengthen internal processes at the German site in Neumünster, the Manmade Fibres segment of the Swiss Oerlikon Group, announced that it invested in a state-of-the-art logistics centre which been fully operational now for a few weeks.
The group stated that this centre is tremendously helpful for speeding up the processing of the numerous orders for meltblown systems for manufacturing high-quality nonwovens for protective masks and apparel that Oerlikon Nonwoven has received over the past months alone.
According to Oerlikon, investing in a new Oerlikon Neumag and Oerlikon Nonwoven logistics centre is paying dividends: the processing speed when manufacturing new systems very much to the benefit of customers considerably improved in the first week after the centre started operating, not least as a result of the optimised processes and the material handling. After 25 years, the group suggested that the time had finally come to break new ground and to better equip ourselves for the future requirements of the markets.
The paternoster storage facility to date not only needed to have regular repairs carried out due to its age, it was also too small for the projects increasingly being carried out today, as the group stated. The only 90 m² were capable of storing around 12,000 parts. In contrast, the new logistics centre now offers more than 250 m² of storage space for in excess of 25,000 parts. As a result, this now also houses all small parts, which used to be stored in the high-rack facility due to lack of space.
Coinciding with the opening of the new logistics centre, Oerlikon also introduced new digital processes that will also help cope with the increasing production volumes. To this end, consistently maintained master data and photos for all parts ensure safe, paper-free storage and handling of the material from now on. In order to minimise mistakes, a laser pointer now indicates from which or to which space the goods are moved. Furthermore, a photo of the material, sorted to type, is displayed on the screen. The digitalisation of the warehousing facilities secures the pick and put-away process so that checking material numbers becomes superfluous when removing items from the warehouse.