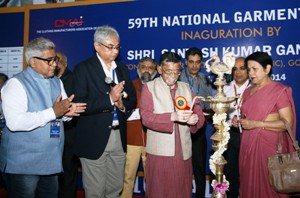 India's textile exports set to touch USD 50 billion mark in the current fiscal, Union Minister for Textiles Santosh Kumar Gangwar said here.
"India have with 40 billion dollars in textile exports moved up to second position from fourth last year and we are hopeful of achieving USD 50 billion this year," Minister of Textiles, Santosh Kumar Gangwar told reporters after inaugurating CMAI's 59th national garment fair here.
Textiles have tremendous potential, and the government will provide full support to improve our exports, Gangwar said.
The industry is also expected to generate large number of jobs. Gangwar said that after agriculture sector, the textiles sector has a huge potential of providing large number of jobs to the vulnerable section of the society.
Gangwar also called for labour law reforms as Minister is concerned about the large number of unorganized labour in the textile industry.
The Minister pointed out that the textile ministry is keen to set up 25-30 textile parks and couple of mega clusters for the development of the industry.
The Clothing Manufacturers Association of India (CMAI) has opened 3-day National Garment Fair here today. The fair is expected to generate a business of around Rs 500 crore. Besides, many trade inquires were also expected to be generated which would culminate into further business in near future, CMAI President Rahul Mehta said.
This B2B fair has 697 stalls displaying over 737 brands. Approximatley 40,000 retailers from all over India were expected to visit this B2B fair.
Mehta informed that the domestic garment industry has been somewhat sluggish for the last couple of months. However, now with the government firmly in place and economic sentiments turning positive, he anticipated a return to growth rate of 12 to 15 per cent in the coming months. Exports were seeing a buoyant phase after a long time and this should continue. He anticipated a good period of growth in the next 3 to 5 years.
Mehta said that the total size of Indian apparel industry is estimated to be around Rs 2,00,000 crore. Out of this, un-stitched garments like dhotis and sarees constitute Rs 50,000 crore. The size of the organized retail sector is around Rs 40,000 crore. The remaining Rs 1,10,000 crore is the size of un-organized  sector. The Indian domestic apparel industry's size is estimated to double within next 5 years, he added.