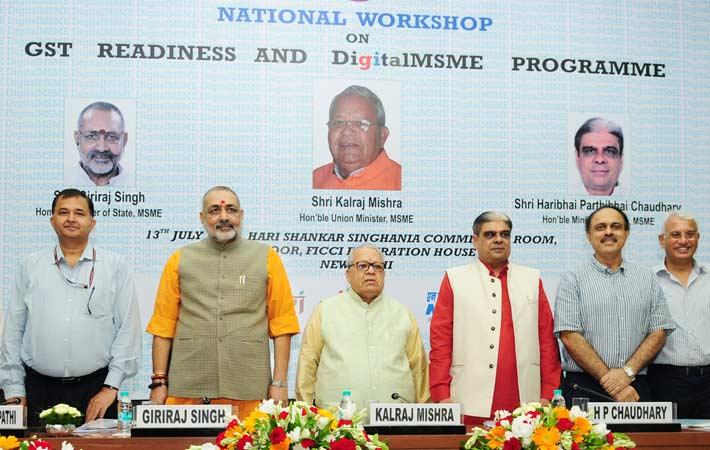 Minister of MSME Kalraj Mishra at National Workshop on GST Readiness of the ministry in New Delhi with ministers Giriraj Singh & Haribhai Parthibhai Chaudhary and other dignitaries. Courtesy: PIB
The rollout of the Goods and Services Tax (GST) will result in overcoming the cascading of taxes and this will significantly reduce the tax burden, said Kalraj Mishra Union minister for MSME. He also said that GST will pave the way for a formal economy hence will give a fillip to growth and employment generation, and MSMEs should see this as an opportunity.

Ministry of MSME along with FICCI organised National Workshop on GST and Digital MSME. Speaking on the occasion Mishra said that the ministry of MSME is giving special focus to the development of MSMEs all over the country and to effectively implement different schemes and programmes. It has also directed the banks to accelerate the pace of solving the loan related problems of the entrepreneurs.

The ministry has taken up various efforts to popularise GST. Under office of development commissioner (MSME), GST cells have been established in Headquarter office, all MSME-DIs and Tool Rooms. NSIC has also set up a Facilitation Cell with a toll free number. Till now more than 12,000 entrepreneurs have been trained for GST by various MSME field offices and training institutes.

Mishra reiterated that that he himself has given information on GST at Guwahati and Agartala in North East. He has directed all officials to use social media i.e. Facebook and Twitter to provide information, to publish notification and to answer questions related to GST. Furthermore, more than 200 additional secretary/joint secretary level officers have been told to monitor the implementation of GST at district level. In this effort two joint secretaries of MSME ministry are involved.

Mishra informed that a special issue of Laghu Udyog Samachar has been published by his ministry focusing on GST. Furthermore, secretary (MSME) has been included in the reviewing committee in the cabinet secretary level. Central MSME minister informed that along with GST, MSME ministry has taken effort to simplify the guidelines for implementation of its various schemes. E-initiatives have been taken in simplification of guidelines wherein PMEGP has been made online. Online Grievance Redressal and Monitoring Systems (CPGRAMS and IGMS) have been established. E-office and mobile friendly website have been initiated and ‘My-MSME’ mobile app, MSME-Data Bank portal and Digital-MSME portal have been started.

He informed that digital MSME scheme has been launched to sensitise and encourage MSMEs towards new approach i.e., cloud computing for ICT adoption in their production and business processes with a view to improve their competitiveness in national and international market.

Minister of state Giriraj Singh informed the gathering that by rolling out GST, the government has opened new opportunities for the hitherto unorganised rural entrepreneurs predominantly in the micro and small segment.

Minister of state Haribhai Parthibhai mentioned that a huge parallel economy which has been existing till now will subsequently come in the formal fold, with the emergence of GST. He appealed to entrepreneurs to choose their vendors judiciously so as to take benefit of the input tax credit being offered by the new system.

Arun Kumar Panda, secretary (MSME) welcomed all participants and put light on the various possible problems which could be faced by the MSMEs in the new GST regime. He emphasised upon the utility of ICT Schemes like Digital MSME which could help in handholding the MSME entrepreneurs. The representative of CBEC was present on the occasion and he addressed to the common queries put forward by MSME entrepreneurs. (KD)