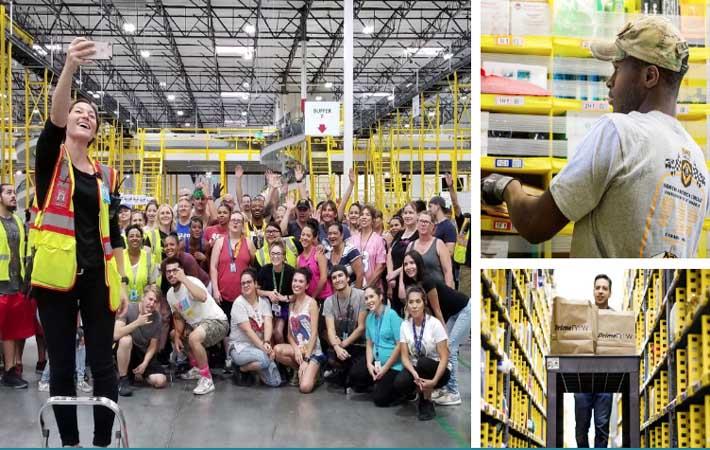 Courtesy: Amazon
In a major investment boost to UK innovation, Amazon is planning to open a new corporate office in Manchester's iconic Hanover Building in 2019 and increase the capacity of its Scotland Development Centre and Cambridge Development Centre. The new investment will provide additional capacity for over 1,000 new highly skilled roles in the UK.
The six-storey, 90,000 sq ft Manchester office will give Amazon capacity to create at least 600 new roles in the city. Highly-skilled teams will work on projects benefitting Amazon's customers around the world, including software development, machine learning and R&D - complementing existing work at development centres in London, Cambridge and Edinburgh, Amazon UK said in a press release.
"With the UK taking a leading role in our global innovation, we are delighted to announce plans to create capacity for over 1,000 new highly-skilled roles across the country," said Doug Gurr, UK country manager, Amazon. "These are Silicon Valley jobs in Britain, and further cement our long-term commitment to the UK."
Amazon will also expand the Scotland Development Centre, located in the heart of city of Edinburgh, providing capacity for more than 250 new, highly-skilled roles. The new roles will join hundreds of software engineers, machine learning scientists and user experience designers who are already working at the centre. Teams at the centre work on new advertising technology and personalised shopping recommendations, benefitting Amazon customers and employees around the world.
Amazon's Cambridge Development Centre will also receive new investment for expansion, creating capacity for an additional 180 new roles. The development centre houses R&D teams that bring new innovation to millions of Amazon customers around the globe, including: Amazon Devices, Amazon Alexa (the brain that powers devices such as Amazon Echo, Echo Dot and Echo Show); AWS; Prime Air (a future delivery system to safely get packages to customers in 30 minutes or less using drones) and core machine learning and retail systems, improving the shopping experience for Amazon customers.
Since 2010, Amazon has invested more than £9.3 billion in the UK to build and run its operations, and is on course to grow to 27,500 roles - including over 6,500 roles in its corporate, Amazon Web Services (AWS) and R&D divisions - by the end of this year.
"Ensuring that the world's best and brightest companies continue to invest and innovate in the UK is at the heart of our Global Britain agenda. Amazon's decision to create hundreds of highly-skilled jobs in Manchester, Edinburgh and Cambridge is an enormous vote of confidence in the UK and a signal to the world that the UK is very much open for business," said UK's secretary of state for international trade, Liam Fox. (PC)

In a major investment boost to UK innovation, Amazon is planning to open a new corporate office in Manchester's iconic Hanover Building in 2019 and increase the capacity of its Scotland Development Centre and Cambridge Development Centre. The new investment will provide additional capacity for over 1,000 new highly skilled roles in the UK.
More Amazon News... More Information Technology News - United Kingdom...