(Views expressed in this article are the personal opinion of the Author, a narration of her experience.) 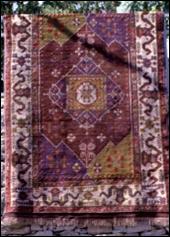 As a graduate student of social-cultural anthropology, I began to study the DOBAG (Dogal Boya Arastirma ve Gelistirme Projesi, natural dye research and development project) carpet-weaving cooperative based in Örselli village in western Turkey in 1998. I returned for long-term fieldwork in 2000-1. I then followed up with visits in 2002, 2003, and 2004. In 2008, 2009, and 2010, I returned with a different topic, Sunni Islam, but also up-dated my material on the cooperative and çeyiz.

What began as a study of a carpet-weaving cooperative expanded to include trousseaux when one day I was interviewing a young woman and her mother weaving carpets. Maybe my questions were uninspiring or perhaps the mother and daughter were bored by the topics of weaving and the cooperative. In either case, their lackluster answers pushed me to search for a new angle. I asked if they ever wove for themselves. I already knew that the practice of weaving for oneself had become taboo among members of the cooperative.

This article was originally published in the "12th Benniel Symposium", Textile Society of America, 2010.