View from the Shoulders of Thar Masters : New Spaces for Ply-Split Braiding

Ply-split braiding is a textile-making technique that involves separating the plies of one cord with a latch hook or similar tool, catching a second cord and pulling it through the gap between the plies of the first. 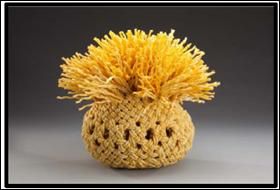 The technique has been most fully developed by the men of the Thar Desert of Rajasthan, who use ply-split braiding, generally of 4-ply cords of goat hair or cotton, to make girths and other paraphernalia for their camels (Harvey 1976; Quick and Stein 1982). Peter Collingwood (1998) provided the fullest description of traditional textiles made by ply-split braiding and of the techniques used to make them. In the decade following the publication of his book, fiber artists in several countries including Collingwood himself explored the use of ply-split braiding for novel creations, many of which were three-dimensional, in contrast with the one- and two-dimensional straps and braids more typical of traditional work in Rajasthan.

Ply-split braiding has been usefully divided into three structural types, depending on the sequence and placement of cord splittings. In plain oblique twining (POT) each cord alternately splits and is split by cords that it meets along its path. In single-course oblique twining (SCOT) a cord may split or be split by several cords consecutively.