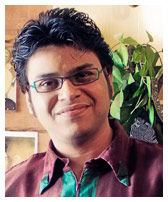 How is India poised for organic wear segment? What movements are going on in the sector globally? What stops good growth?

The Indian textile industry seems to have come to a full circle and is now back to the basics, with khadi, exquisite peace silks, organic cotton and a variety of natural fibers being the hot new selling products. The Western market is no doubt highly sensitive and more aware of the various methods through which to manufacture and produce ethically; the Eastern market, on the other hand, is learning the ropes.

Bhu:sattva, a venture that started 2 years back, now caters to this growing demand of ethically produced products by supplying to more than 100 India’s best multi designer stores and also chain of luxury hotels, high end fashion portals and tourism industry. The concept has been accepted and the demand is soaring in cities where the customer’s awareness ratio is high, to name a few cities  like Pune, Goa, Pondicherry, Hyderabad and many others. We run extensive promotional campaigns to broaden the awareness of organic and sustainable clothing.

You can say that the concept of eco friendly or organic clothing has been largely inspired from the organic food and cosmetics being popularized throughout the world and is now no more an alien to the Indian market. With the threat of global warming looming on our heads, eco friendly products are finding a favor amongst the coming generation. Everywhere you go, you hear people talking about eco-friendly products, be it eatables, deodorants, shopping bags or beauty products.

Talking about numbers, the organic cotton market is set to become a $1 billion industry. Global retail sales of organic cotton apparel and home textile products reached an estimated $4.3 billion in 2009, according to Organic Exchange's (OE) Organic Cotton Market Report 2008-2009. Despite the recession, sales grew 35% from the $3.2 billion market in 2008. The market will only continue to grow, according to OE. They expect a 20 to 40 % increase in both 2010 and 2011 which would result in an estimated $5.1 billion market in 2010 and $6.0 billion market in 2011 driven largely by "consumer interest in 'green' products", and the development of new and existing organic cotton programs. This shows the upbeat scenario and a very encouraging market for the products that are organic and sustainable in nature.

Organic farming appears less lucrative, only because the long-term damage of conventional farming is not quantified or taken into account. For instance, the millions spent to treat toxic residues can be saved if the problem wasn't created in the first place. Unfortunately, organic cotton gets little support from markets and financial institutions because it is considered more expensive. Over time, however, organic farms are more productive as the soil in is richer and more resistant to disease while the other is stressed and sterile due to chemical applications.

Organic cotton fabric is more expensive than traditional cotton because the natural ingredients used to farm organically are more expensive than the toxic chemicals used to farm traditional cotton. This is because more toxic chemicals are sold and used, they are cheaper to produce. Also, when the organic cotton fibers are woven into fabric, the manufacturers are required to organically clean all of their equipment before weaving the fabric, adding more cost to weaving the fabric.

The difference in cost may remain; however, as organic producers have to pay for third-party certification whereas conventional farms often gets subsidized chemicals and pesticides which off-sets costs.

In conclusion, we may end up paying more for organic products, but the pay-back is tremendous: better health for people, the planet and all her creatures.