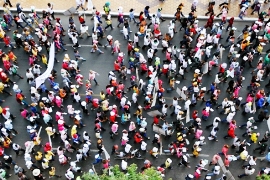 courtesy: Sreng Meng Srun/Phnom Penh Post
Thousands of garment workers took part in a march to mark the International Labour Day in the capital Phnom Penh on May 1, 2013.
The workers were demanding better working conditions and more wages in Cambodia’s garment factories.
They said the minimum wage should rise to US$ 150 per month in view of the rising cost of living.
About 5,000 protestors demonstrated in front of the National Assembly, where they put up a list of demands to improve their wages, conditions and rights.
The apparel industry is the third largest foreign exchange earner for Cambodia. In 2012, it fetched US$ 4.6 billion in foreign trade, showing a growth of eight percent year-on-year, according to figures from the Ministry of Commerce.
There are over 300 garment manufacturing units in Cambodia, which together employ around 335,000 workers, more than 90 percent of whom are female.
The US and the EU are the major importers of Cambodian clothing, followed by Canada, China, Japan and South Korea.