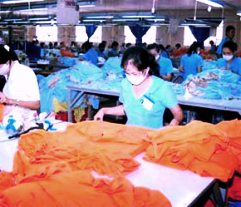 The garment and textile industry in Vietnam should change its strategy of development over the next 10 to 20 years, in view of global integration, said experts at a meeting held in Hanoi to discuss the country’s garment sector development strategy, first put in place in 2008.
The garment and textile sector accounts for eight percent of Vietnam’s annual GDP, Deputy Minister of Industry and Trade Ho Thi Kim Thoa said at the meeting, according to Viet Nam News report.
The Minister said Vietnam is among the top five global garment and textile exporters and its exports have grown at an average rate of 16 percent during 2008-2012.
Thoa said the development of the garment industry has contributed to Vietnam’s socio-economic development. However, while most workers come from rural areas, the garment units are based in cities, where the cost of living is high. This calls for a shift in strategy to relocate garment units from urban to rural areas of the country, she added.
An official from the Garment and Textile Institute said Vietnam’s domestic garment industry is dependent on imports for various raw materials, machinery and chemicals.
Moreover, weak supply chains, lack of skilled workers, low added value and lack of marketing strategies are some other problems troubling the Vietnamese garment sector, the official said.
Vietnamese garment industry is aiming to achieve export turnover of US$ 31-32 billion by 2020 and US$ 60-65 billion by 2030, much higher than last year’s exports of US$ 17.2 billion.
Vietnam’s garment sector strategy is to develop Ha Noi and HCM City as centres for design and supply of raw materials, while not encouraging any new production units in these cities.
As per the strategy, US$ 3.9 billion investment would be made in Vietnamese garment sector during 2011-15, while another US$ 6.4 billion would be pumped in during 2016-20.