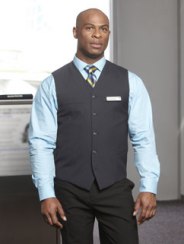 More than 64,000 United employees will debut the garments, which feature accents of blue, gold, silver and gray.

Customer Service Agents: The uniform includes a wardrobe of black blazers, trousers, sweaters, vests and skirts. Agents will also wear colored shirts and distinctive neckwear that vary depending on their job responsibilities.

United Airlines and United Express operate an average of 5,446 flights a day to more than 370 airports across six continents. In 2012, United and United Express carried more passenger traffic than any other airline in the world and operated nearly two million flights carrying 140 million customers. United is investing in upgrading its onboard products and now offers more flat-bed seats in its premium cabins and more extra-legroom economy-class seating than any airline in North America.