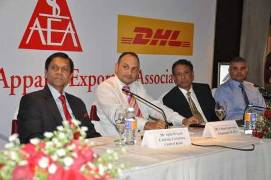 courtesy: ft.lk/Sameera Wijesinghe
The apparel manufacturing sector in Sri Lanka may face a shortage of skilled labour within the next 2-3 years, due to the country’s anticipated transition into a middle-income country, Ajith Nivard Cabraal, Governor of Central Bank of Sri Lanka (CBSL), said while addressing the Annual General Meeting of the Sri Lanka Apparel Exporters’ Association.
Mr. Cabraal said Sri Lanka is likely to become a US$ 100 billion economy with a per capita income of US$ 4,000 within the next 2-3 years, and it would not be business as usual then.
At that time people will want better salaries, and there would also be some changes in labour composition, he said, and urged the apparel industry to take steps towards reducing reliance on labour, while improving productivity.
He advised that the Sri Lankan garment industry would have to be prepared for changes in the same way as it prepared for dealing with the discontinuation of the GSP Plus.
He said it would be important for companies in the clothing sector to carefully strategize in order to ensure long-term growth.
Speaking at the same event, Sri Lanka Apparel Exporters’ Association Chairman Yohan Lawrence said the garment industry is already facing shortage of labour in the metropolitan areas.
He said Colombo and Gampaha districts have a large number of small and medium garment enterprises and soon it would become necessary for these industries to shift to other areas where there is ample labour availability.
Some big businesses have already started setting up their units in interior areas, but SMEs would need some form of assistance through development finance schemes, Mr. Lawrence said.
He said Sri Lanka’s garment industry is expected to achieve US$ 4 billion turnover this year.
He said the future growth of Sri Lankan apparel industry would come from new markets like China, Brazil, Russia, Japan and South Korea, and suggested early signing of preferential trade agreements with Japan and South Korea.
He also suggested further liberalization of FTA with India, which is currently limited to eight million pieces of textiles and apparel.