China to be largest importer of cotton lint in 2019-20 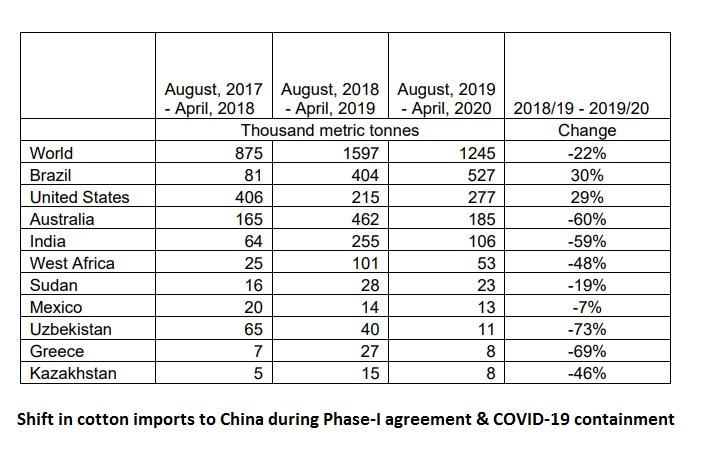 Pic: ICAC
Despite a 12 per cent decrease from the previous season attributed to trade tensions with the US and a slowdown in manufacturing during the COVID-19 containment, China is expected to remain the world's largest importer of cotton lint and import 1.8 million tonnes of cotton in 2019-20, according to the International Cotton Advisory Committee (ICAC).

"Market share in China shifted over this period with imports from Brazil increasing by over 170 per cent in 2018-19," ICAC said in its June estimate of world cotton supply and demand.

As phase one of the trade agreement entered into force, stringent COVID-19 containment measures in countries have slowed manufacturing and trade across the globe. With global cotton consumption revised down to 22.5 million tonnes for 2019-20, a 13 per cent decrease from the previous season, trade is expected to decrease to 8.25 million tonnes, an 11 per cent decrease. Imports to China have shifted again during this period of reduced demand from both COVID-19 containment and trade agreements.

Comparing the August through April period for the 2018-19 and 2019-20 seasons, global imports for the nine-month period are estimated at 1.245 million tonnes, a 22 per cent decrease from the previous period, the ICAC period said.

Drought conditions in Australia have limited total exports for 2019-20. Exports from India to China have decreased following an increase the previous season. Exports from West Africa (including Benin, Burkina Faso, Chad, Cote d'Ivoire, Mali and Togo) show a 48 per cent decrease over the period. Exports from other countries to China, including Sudan, Mexico, Uzbekistan, Greece and Kazakhstan, have seen decreases that range from 7 per cent to 73 per cent.

Following production and a growth in exports in 2018-19, total exports from West Africa are expected to decrease in 2019-20 to 1.1 million tonnes. With production estimated at 1.3 million tonnes for the region, stock levels would increase if quantities of the 2019-20 crop are not exported. Imports from West African countries to China have fallen by 48 per cent over the August to April period with limited opportunities to export under reduced demand from COVID-19 containment and improving trade relations between the US and China.

Despite a 12 per cent decrease from the previous season attributed to trade tensions with the US and a slowdown in manufacturing during the COVID-19 containment, China is expected to remain the world's largest importer of cotton lint and import 1.8 million tonnes of cotton in 2019-20, according to the International Cotton Advisory Committee (ICAC).
More International Cotton Advisory Committee (ICAC) News... More Textiles News - United States Of America...