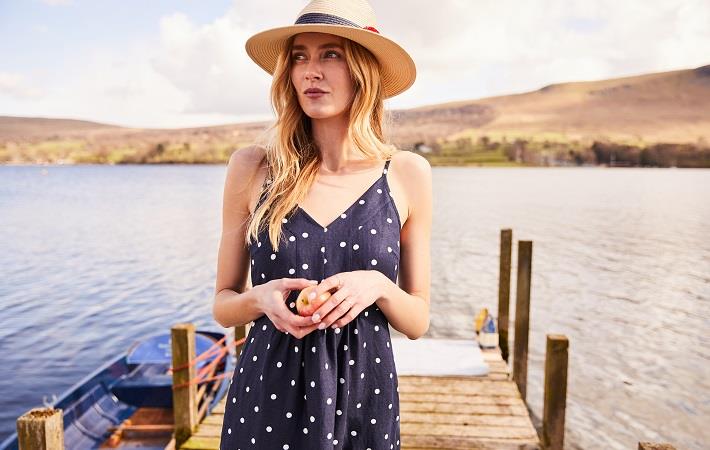 Pic: Joules Group
Joules Group, a premium lifestyle brand, reported reduction of 1.4 per cent in revenue for first half (H1) FY20 ending on September 24, 2019 at £111.6 million. On a comparable 27-week period, including Black Friday in both periods, revenue increased by 1.3 per cent. E-commerce performed well which now represents 51.2 per cent of total retail sales of Group.
The performance in H1 was in line with the Group's expectations. Results are reported to be impacted by the timing of Black Friday trading period, which was in H2 in FY20 but in H1 in the prior year.  Retail revenue was in line with the prior year at £79.9 million increased by 3.1 per cent including Black Friday in both periods.
E-commerce channel continued to perform well with 10.2 per cent growth at £40.9 million in H1, with good growth in UK and strong performances in the US and Germany. Stores revenue which play an important role in Group's 'Total Retail' model decreased by 9.2 per cent to £36.2 million.
Wholesale revenue decreased by 5.1 per cent to £30.8 million. This represented continued growth in international revenue, albeit at a slower rate than in the prior year, offset by an anticipated decline in sales to the UK wholesale customer base, which has been impacted by sector trends, especially for Group's smaller, usually high-street located 'field' accounts.
Other revenue which consists of royalties from sales of licensed products sold in partner channels and commission on sales on the 'Friends of Joules' digital marketplace increased by 6.3 per cent to £0.9 million.
Total international revenue increased by 6.1 per cent and now represents 17 per cent of total Group revenue. International e-commerce performance was particularly pleasing at 40 per cent growth, with the brand resonating well with customers in the US and Germany.
The Group ended the Period with 124 stores, one fewer store than at the beginning of the Period, with the focus in the half being on both portfolio management and the roll-out of our new point of sale system.
The Group reported in their trading update this month that their sales over the Christmas period were disappointing, reflecting a lack of available stock to meet online demand. However, the Group identified the root cause and said to have taken steps to rebalance the allocation of stock between channels for Spring / Summer 2020 as well as strengthen their underlying processes. Importantly, the Group is reassured by the performance it saw in the retail channels where they had good stock availability and by their continued online traffic growth, evidencing the strong customer demand which continues to exist for the Joules brand.
The Group also provided an update on our supply chain and said they will face cost headwinds from China-US tariffs on their US wholesale business during the second half of FY20. Group cautiously expects these to continue into FY21. In addition, the Group is making strategic developments to their supply chain operations in the UK and US, to support long term growth, improved customer service levels and better productivity.

Joules Group, a premium lifestyle brand, reported reduction of 1.4 per cent in revenue for first half (H1) FY20 ending on September 24, 2019 at Â£111.6 million. On a comparable 27-week period, including Black Friday in both periods, revenue increased by 1.3 per cent. E-commerce performed well which now represents 51.2 per cent of total retail sales of Group.
More Fashion News - United Kingdom...