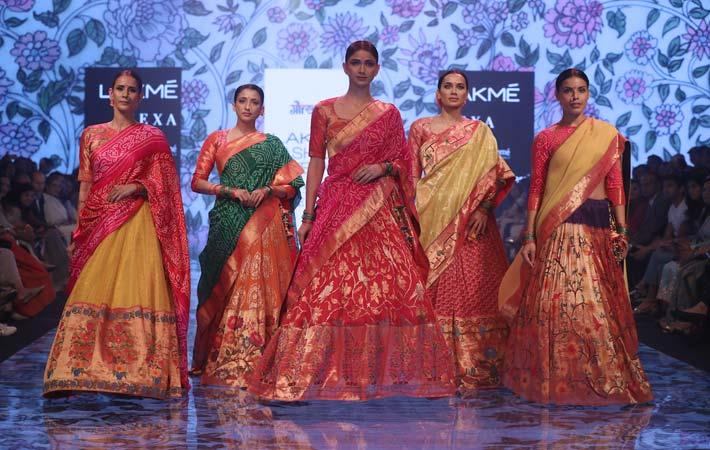 Neutrals and earthy hues were the key tones at the Kanika Goyal, with an addition of subtle pinks and blues for colour. In stark contrast were saturated red and yellow as accent shades. Multicoloured metallics added the dramatic look in the creatively colour-blocked collection.

Sportswear and tailoring influences were used for structured garments with a street and casual wear vibe.The colour card was masculine with ecru, brown, white, rust and steel/light grey.

On the same day, designer Gurang Shah’s label Gaurang unveiled its ‘Peshwai’ collection. The rich weaves of Paithan rose to great splendour during the Mughal Era but Maratha king Peshwa Bajirao brought this glorious textile in the 18th century to Baroda.

Gaurang presented the 18th-century motifs in a new avatar. The designer experimented with the checked Kota Doria, turned it into a jamdaani canvas, and patterned that with Persian designs and mosaics. In addition, the designer accentuated the intricate mustard seed Bandhani for the ornate weaves, according to a company press release.

For the ladies, there were sumptuously woven saris in dazzling weaves along with grand ethnic wear. The collection also had lehengas, cholis, dupattas, kurtas, bundies, dhotis, sherwanis.

A day earlier on August 22, Jayanti Reddy unveiled her ‘Benares and Beyond’ collection while Ridhi Mehra launched her ‘An Ode To Heirlooms’.

Inspired by the picturesque beauty of Varanasi, the ‘Benares and Beyond’ collection teamed Banarasi woven fabrics with sheer organza and net to add fluidity. A variety of anarkalis, dhotis, long kurtas, dupattas, lehengas and cholis, with designs inspired by natural motifs like flowers and mangoes, were part of the collection. The colour palette ranged from muted beiges to pistachio greens, ivories, flaming reds, wines, hot pinks and rich purples being dominant.

Some of the eye-catchers in Rawal’s collection were the buttonless black bundgala, a solidary dhoti/kurta/jacket entry, long soft shirt with a rear harness, a stylish hoodie, waistcoats with lapels or high slits for shirts and a reverse closure shirt, the brand said in a statement. (DS)