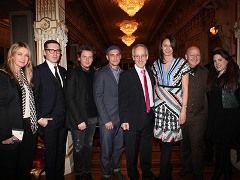 As Paris Fashion Week was in full flow last week, The Woolmark Company partnered with the British Fashion Council (BFC) and UK Trade & Investment (UKTI) to host a ‘Brits in Paris’ event at the British Ambassador’s beautiful residence in Paris.

In 2008 the BFC launched LONDON show ROOMS to take emerging talent to Paris to present their collections in a showroom environment. In addition to Paris, LONDON show ROOMS now moves to different markets including LA, New York and Hong Kong, offering a great opportunity to the designers that take part.

Sir Peter Ricketts, the British Ambassador to France, hosted the event and spoke of his pleasure at being able to support such a fantastic, talented and diverse industry worth approximately £20.9 billion to the UK economy.

"London and the UK have always been renowned for originality and it’s fascinating to see how this talent translates into highly successful fashion businesses. The worldwide reputation enjoyed by its fashion colleges also helps to attract the brightest and best young talent to the UK. I am so pleased to be able to play my part in this success story and in encouraging the growing recognition being given to British design excellence here in France and further afield."

The Woolmark Company places great importance on developing and nurturing design talent around the world and the recently announced International Woolmark Prize winner, introduced by BFC Chair Natalie Massenet, is a great example of this.

London, during fashion week, was chosen as the city to host the first re-launched award won in the '50s by Karl Lagerfeld and Yves Saint Laurent. "The prize is our commitment to supporting the future of the fashion industry," said Stuart McCullough, The Woolmark Company CEO.

The Woolmark Company works in collaboration with a wide range of international designers, both emerging and iconic brands/ambassadors including Richard Nicoll, Jonathan Saunders, Mark Fast, Patrick Grant, Richard James and Vivienne Westwood in the UK, and recently announced partnerships with Narciso Rodriguez and Alexander Wang in the US.

Aseem Sood
Palmal Group
We have plans to add a new factory every year in the near...
Marcelo Duarte
ABRAPA
Brazilian farmers are committed to sustainability of cotton ...
Aditya Agrawal
Cloth Haus
We will source from India and make in India
Juan Pares Boj
Textile Santanderina
In process of developing product line of technical sports...
Abhishek Bajaj & Samiksha Bajaj
Samshek
Womenswear brand for regular and non-regular sizes
Stephan Caras
Stephan Caras Design Inc.
During his fashion journey, he has established a new...
Andrea pompilio
Label - Andrea pompilio
My style has its roots in tailoring and mixing with urban...