India gets cool with wool 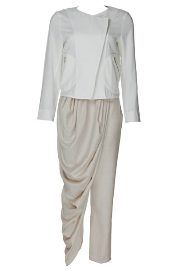 The Woolmark Company’s global Cool Wool campaign reached a new audience, with the launch of Cool Wool at the trade level at this year’s India Fashion Forum in Mumbai.

The launch of Cool Wool by The Woolmark Company – the global authority on wool – into the Indian market takes the global campaign to new heights, following the success that the campaign received in European and Middle Eastern markets last year.

The Woolmark Company’s country manager for India, Amir Sheikh, said the initial response amongst the trade had been very welcoming and a consumer launch with the Raymond Group was set to be rolled out in May.

The Woolmark Company's global Cool Wool campaign reached a new audience, with the launch of Cool Wool at the trade level at this year's India Fashion #

“We observed keen interest among trade visitors and Indian worsted companies have shown good interest for all-season Cool Wool fabrics and are looking forward to collaborate with The Woolmark Company for this campaign,” Mr Sheikh said.

The aim for the trade launch of the Cool Wool program in India is to allow for future growth, by inviting and including more partners for 2014 starting with the product development of supporting Woolmark collateral including tickets and labels.

“This year we are working closely with Raymond in selected stores from May, and the campaign will also be promoted through GQ and Jetwings magazines from April to June to build consumer awareness.”

The Woolmark Company’s inaugural ambassador for India Rajesh Pratap Singh has also created a Cool Wool outfit which was displayed at India Fashion Forum and is now used for PR activity to highlight Cool Wool in the consumer media.

The campaign’s objective is to ultimately extend the wool selling season in India, by providing consumers with a greater understanding and experience of the natural performance benefits of Cool Wool in comparison to other fibres normally worn in the hotter months.

The original Cool Wool program, launched by the International Wool Secretariat nearly 30 years ago and used up until the late-1990s, was very successful. However, the new Cool Wool campaign takes the concept of trans-seasonal apparel even further for the 21st century with even lighter weight fabrics and yarns.

Cool Wool garments are manufactured from lightweight Merino wool fabrics with a maximum weight of 190 g/m² and a maximum mean wool fibre diameter of 22.5 micron. The fabric/garment surface is clean and smooth. Cool Wool fabrics and garments carrying the Woolmark logo are normally 100 per cent Pure New Wool but can include blends of wool with fine animal fibres.

Fiona & Magnus Smyth
TotsBots
On a mission to normalise reusable nappies
Ankur Bhatia
Chogori India Retail Limited
Our focus is to source more and more from India
Juan Pares Boj
Textile Santanderina
In process of developing product line of technical sports...
Dhruv Toshniwal & Udit Toshniwal
The Pant Project
Made-to-order pants
Fatima Lopes
Fatima Lopes
"I believe that there's a market for luxury, for the ones...
Silvia Venturini Fendi
Fendi s.r.l
"Yes, my confidence and positive attitude are my strengths...
Sujata & Taniya Biswas
Suta
Our aim by 2030 is to work with at least 2 lakhs weavers