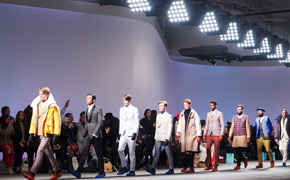 There will be 30 shows, 22 presentations, 36 onsite showrooms, 21 on schedule events and 3 official show venues at LC: M SS14. Domenico Dolce, Stefano Gabbana and Dylan Jones, chair of London Collections: Men, will open the SS14 season with an event on Saturday 15th June.

Burberry will show their mainline menswear collection in London after more than 10 years showing in Milan, joined by internationally acclaimed brands rag & bone, Jimmy Choo and Pringle of Scotland who show in London for the first time this June.

London: The Home of Menswear History & Heritage : The British Fashion Council (BFC) commissioned a V&A study which explores the history of British menswear and seals London’s reputation as the historical home of menswear. From dandy to wellington boots, the study travels in time from 1528 to present day, identifying ten iconic styles that originated in Britain and have become mainstays in international menswear. The study will be accompanied by a menswear heritage map of London to be launched on Tuesday 18th June by the Mayor of London.