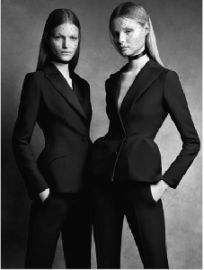 Alongside more of a hundred dresses that epitomize Christian Dior’s revolutionary work, will be presented photographs by Patrick Demarchelier and works by some of the major contemporary Chinese artists such as Liu Jianhua, Lin Tianmiao, Qiu Zhijie, Yan Pei-Ming, Zeng Fanzhi, Zhang Huan, and Zheng Guogu, who will all give their own vision of the Dior spirit.

Esprit Dior is the spirit of a visionary designer Christian Dior. He has changed the rules of elegance forever and in the whole world. He has created a Couture House rooted in the deepest French traditions with the purpose not only to bring women beauty and elegance but most of all happiness. A Couture House in which passion for creation is still constantly alive, and where craftmanship is dedicated to a desire for absolute excellence.

The Museum of Contemporary Art of Shanghai, honours Christian Dior with a major exhibition titled 'Esprit Dior'. Located in the Shanghai#

When Christian Dior unveiled his very first collection on 12 February 1947, he perfumed the salons at 30 Avenue Montaigne with his very first fragrance, Miss Dior, without which he considered his creations incomplete. The unique silhouette he launched on that momentous day revolutionized the world of fashion with its accentuated hips, cinched waist and emphasized bust.

The natural curves of the female body were stylized and idealized. The elegant new Dior line, a pure exaltation of femininity, was immediately christened the “New Look” by Carmel Snow, the eminent editor of Harper’s Bazaar. The Dior myth was born, and every season for the next ten years Christian Dior invented the new lines that made fashion history and created an inimitable style.

From 1947 to today, the couturier and his successors have continued to work as architects of couture. The mythical Bar ensemble, star of the 1947 Spring Summer Collection, is a vibrant tribute to the femininity so dear to Christian Dior. The creations of Raf Simons, Dior’s new artistic director, symbolise the continuity of the Dior spirit by returning to the very essence of the couturier’s vision: the purity, power and modernity of the Dior line.