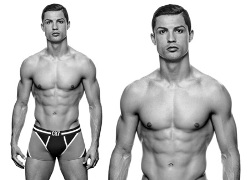 courtesy: latintimes.com/CR7
After releasing the news in September, 2013, the hotly-anticipated debut male innerwear collection from the popular Portuguese footballer Cristiano Ronaldo is finally out for sale internationally.
Created in collaboration with the Danish firm JBS Textile Group, the men’s line titled ‘CR7 by Cristiano Ronaldo’ is designed under the creative guidance of the New York-based fashion designer Richard Chai.
Available in two sets, one meant for teenage boys and the other for fashionable adults, the luxury range includes striped socks, tight-fit briefs and boxer shorts.
Based in mixed palette of bright and sombre shades of red, green, blue, turquoise, black and white, the ensembles are accented with pinstripes.
Other than launching the collection, the 28-year-old Real Madrid soccer star has also modelled for his maiden fashion line.
Speaking on CR7 brand, Cristiano Ronaldo said, “The companies that I choose to work with need to be fashion oriented and of the highest quality to be able to deliver a superior product to my fans. In JBS, I have found a collaborator who produces products of the highest quality, and have a strong heritage of great design.”
Founded in 1939, JBS is a leading family-owned and family-run innerwear manufacturer that additionally specializes in homewear and winterwear.
Richard Chai was voted as the menswear designer of 2010 by the Council of Fashion Designers of America.
Ronaldo plays as a forward for Spanish La Liga club Real Madrid and serves as captain of the Portuguese national team.